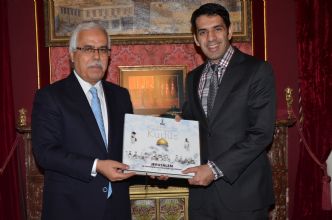 Mr. Shaarik H. Zafar, President Barack Obama’s Special Representative to Muslim Communities, visited Dr. Halit Eren, Director General of IRCICA, on 17 December 2015. During the meeting, Dr. Eren briefed Mr. Zafar on the Centre’s activities, particularly those that highlight the cultural, scientific and artistic interactions between Muslim communities and the Western world in history and at present. With these efforts, the Director General said, IRCICA aims at opening new avenues towards acknowledgement and further study of the contributions of world’s cultures to each other. Dr. Eren guided Mr. Shaarik Zafar to the library building of the Centre where he briefed Mr. Zafar on the library’s book collections and world-wide services as well as the Centre’s publications resulting from research and academic congresses. At the end of the visit Mr. Zafar recorded his impressions in the Visitors’ Book: “Thank you very much for your warmth and hospitality. But more importantly, thank you for the great service you are providing to the memory and history of Islamic art, culture, and civilization.”
Mr. Shaarik Zafar was appointed as the Special Representative to Muslim Communities at the U.S. Department of State in July 2014. He is responsible for driving Secretary Kerry’s engagement with Muslim communities around the world  on issues of mutual interest, in support of shared goals, and to advance U.S. Foreign policy. Mr. Zafar, of Pakistani origin, is a graduate of the Plan II Honors Program at the University of Texas at Austin and the University of Texas School of Law. He received the 2011 Outstanding Young Texas Ex Award, which recognizes alumni under the age of 40 who have made significant achievements in their careers and service to the University. He is a recipient of the DHS Secretary’s Award for Excellence, the DHS Certificate of Achievement, and a NCTC Team Award. He has also received awards from a number of civil society organizations including , the American-Arab Anti-Discrimination Committee, the Association of Pakistani Physicians of North America, the South Asian Chamber of Commerce, and the North American South Asian Bar Association.