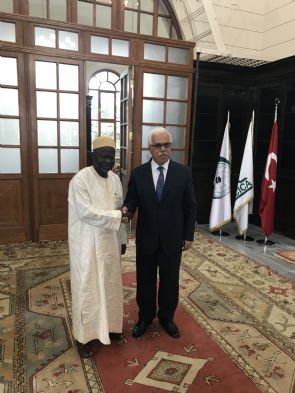 IRCICA was honoured by the visit of H.E. Mr. Abubakar Ousainu N.M. Darboe, Minister of Foreign Affairs of the Gambia, on 14 July 2017. H.E. the Minister and Director General Dr. Halit Eren’s meeting was an excellent occasion to brief the Minister on the Centre’s activities. It was all the more memorable as it coincided with the Centre’s first work day at its headquarters newly allocated by the Presidency of the Turkish Republic, in the historical complex of the Ottoman State’s “Hazine-i Evrak” (“Treasury of Documents”, i.e. the state archives) within the “Bab-ı Ali” (“Sublime Porte”), i.e. the Grand Vizier’s offices.

The Minister expressed his appreciation of the Centre’s activities and the progress of cultural cooperation between the Gambia and IRCICA.