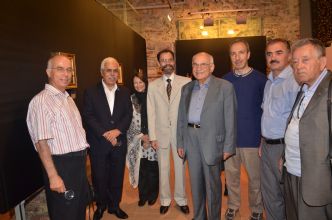 IRCICA and the Istanbul Classical Arts Centre (İKSM) have jointly organized an exhibition of calligraphies by the world-renowned Iranian artist Amir Ahmad Falsafi, who is known in particular as the Dean of masters in Nesta’liq (Ta’liq) style for the perfection and beauty of his writing. The exhibition opened at Dolmabahçe Art Gallery in Istanbul on 18 July 2013.

IRCICA Director General Dr. Halit Eren opened the exhibition expressing his pleasure that IRCICA and İKSM were offering artists, students and art lovers the opportunity to see the works of one of the most important masters of the art of calligraphy in our time, Mr. Amir Ahmad Falsafi. He pointed to the distinguishing features of Mr. Falsafi’s works including the remarkable refinement, excellence and technical perfection he achieves which won him the title of the Dean of Nesta’liq calligraphers. He invited the artist to address the audience.

Mr. Amis Ahmad Falsafi underlined the importance of arts in reinforcing relations between peoples of different countries; in this respect he stressed the role of calligraphy in promoting cultural exchanges among Muslim countries. He recalled that among the latter mutual influences have always taken place and been beneficial for development of the arts. He said that for his part, he always works in full consciousness of this role of the arts and tries to do his best to contribute towards this aim.

Then Master Calligrapher Uğur Derman, specialist of the art of calligraphy, spoke of the Nesta’liq style of writing, informing the audience about its particularities. This style was born and developed in Iran and its region; it is a very fine and delicate style, especially in its finer, Khurde Ta’liq version, and therefore flawless perfection is very hard to achieve – Prof. Derman said he had examined the works displayed with a magnifier in his hand and noted their flawless perfection; this leads him, he said, to reaffirm that Mr. Falsafi is the greatest master of this art.

More than thirty works by Mr. Falsafi will be on display in the Gallery until 26 July 2013.