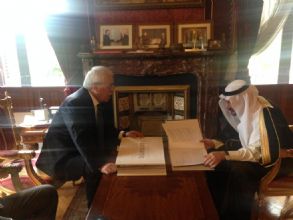 The Secretary General of the Organization of Islamic Cooperation (OIC), H.E. Mr. Iyad Ameen Madani, visited IRCICA, Istanbul on Saturday, 11 October 2014. IRCICA Director General Dr. Halit Eren briefed the Secretary General on the progress of activities. The meeting focused mainly on the upcoming events on the Centre’s calendar. Furthermore, salient features of the Centre’s work plan for 2015 were discussed on which the Secretary General gave his recommendations. Another theme of discussion was the OIC’s Ten-Year Program of Action and particularly IRCICA’s tasks and contributions within its framework. As the current Program will conclude in 2016, the Organization is preparing the new one, to be implemented during 2016-2025. The OIC establishes the objectives, guidelines and planned activities of its Ten-Year Program of Action taking into consideration not only the needs and aspirations of its Member States and the requirements of cooperation for development within the Muslim world but also the United Nations Millennium Development Goals and post-2015 Development Agenda.