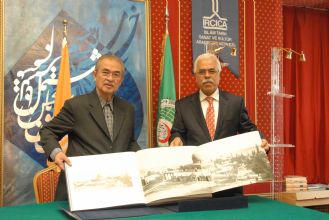 Director General Dr. Halit Eren received Tun Abdullah in his office at Seyir Köşk. He briefed the distinguished guest on developments relating to the Centre’s activities, with focus on the long-term programs such as those relating to the congresses on history, the Islamic heritage preservation program on Al-Quds, studies on copies and translations of the Holy Quran, among others. Reference was made to the cooperation between Malaysia and IRCICA which gave fruitful results in the past starting from the mid-1980s. The book titled Islamic Civilization in the Malay World, published in several languages, was recalled: it was the outcome of a joint project involving the governments of Malaysia, Brunei Darussalam and Indonesia with IRCICA as coordinator. The publication of some of IRCICA’s publications in the Malay language, visits of representatives from universities of Malaysia to IRCICA, and cooperation between Malaysian cultural institutions, scholars and artists with IRCICA were among the collaborative activities recalled during the meeting.

Dr. Eren guided Tun Abdullah bin Hj. Ahmad Badawi to the library of the Centre. A welcoming meeting was held at Çit Qasr where IRCICA staff members were present. Tun Abdullah commended the activities of IRCICA and wished Dr. Eren and the Centre continual success.