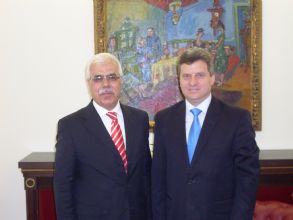 H.E. Gjorge Ivanov, President of the Republic of Macedonia, received the Director General of IRCICA Dr. Halit Eren at the Presidential Office on 23 November 2009. The meeting was an excellent opportunity for Dr. Eren to brief the President on the activities of IRCICA in general and those areas of these activities covering the cultural and architectural history and heritage of Macedonia and its region in particular. President Ivanov expressed his appreciation of the works undertaken and channels of international cultural cooperation established by IRCICA. During the talks, which lasted more than an hour, the importance of studying the multicultural history of the Balkans, particularly the four centuries of the Pax Ottomana, was underlined; the President said that this long period of peace in the Balkans was made possible thanks to tolerance, whereby peoples of all faiths lived together peacefully.

The President graciously accepted to extend his patronage to the congress on “Islamic Civilisation in the Balkans”, fourth of IRCICA’s series on this theme, to be organised in the capital city Skopje jointly with the Macedonian Academy of Sciences and Arts (MANU) The congress will be held in the second half of October 2010.

President Ivanov is a political scientists, educationist, and specialist of studies on “civil society”, and served as professor of political science before assuming the office.

Prof. Georgi Stardelov, President of the Macedonian Academy of Sciences and Arts, and Prof. Vlado Kambovski, Vice-President, and Chairman of the Centre for Strategic Studies of the Academy, were present at the meeting. Dr. Numan Yusuf Aruç from MANU, and Dr. Cengiz Tomar from IRCICA, were also present.