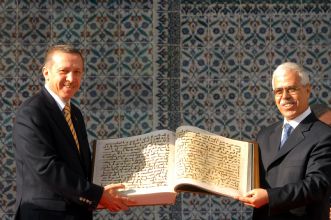 H. E. Mr. Recep Tayyip Erdoğan, Prime Minister of Turkey, inaugurated the newly renovated “Holy Relics” Section of Topkapı Palace Museum in Istanbul. The opening was also attended by the Minister of Culture and Tourism Mr. Ertuğrul Günay, the Minister of Public Works and Settlement Mr. Faruk Nafiz Özak, the Minister of Environment and Forestry Mr. Veysel Eroğlu, the Governor of Istanbul Mr. Muammer Güler and the Metropolitan Mayor of Greater Istanbul Mr. Kadir Topbaş. Prime Minister Erdoğan delivered a comprehensive address, in which he underlined that all heavenly religions and beliefs uphold righteousness, justice and compassion. He said that the collections of the Holy Relics section represent a spiritual treasure which gives Istanbul and Turkey the greatest pride to be the keeper; this treasure inherited from the three major heavenly religions is of inestimable value. The Prime Minister said that the sacred relics of Prophet Mohammed and many other prophets kept in this section will enlighten the hearts of believers not only at present but also for the future generations; the gifts our ancestors sent to the holy places during centuries reflect the importance they gave to culture, to arts and artisans. “The door of the Kaba is here. The locks of the Kaba are here. It would be a big mistake to consider and to picture this history as bygone history. This place is not only a museum but the abode of a living civilization. … As a reward for loyalty to this legacy, for centuries Istanbul was the capital of our civilization. In this capital not only Muslims but the adherents of all beliefs lived in safety and security. … This place houses symbols of the search for eternal truth, history of mankind, and the sacred cause that gives humankind it humanness. Following the address of Prime Minister Erdoğan, Dr. Halit Eren, Director General of IRCICA presented the Prime Minister with one of the latest publications of IRCICA, consisting of a facsimile edition of the copy of the Quran which is attributed to the time of Caliph Othman, the third caliph. The original copy is kept in the Topkapı Palace Museum. The edition and the accompanying scholarly study by Dr. Tayyar Altıkulaç were published by IRCICA in 2007. Mr. Ertuğrul Günay, Minister of Culture and Tourism of Turkey, Mr. Orhan Düzgün, Director of Museums, and Prof. İlber Ortaylı, Director of Topkapı Palace Museum, also gave addresses.

The relics include personal articles and garments which belonged to Prophet Mohammed and other prophets and to the companions of Prophet Mohammed. The section also houses keys and locks of the Kaba, rare manuscripts, and containers and wrappers in which the objects were carried from Mecca and Medina to Istanbul. These objects of great religious significance are also excellent works of art. Following the conquest of Egypt by Sultan Selim I in 1517, the Caliphate passed on to the Ottomans; so were the keys of Mecca and the relics relating to the Kaba. Some of the relics were transported to Istanbul, the seat of the Caliphate, and some others were placed in the tomb of Prophet Mohammed. Precious gifts, new curtains and keys for the Kaba were sent every year from Istanbul and from other regions of the Muslim world. Thus the number and variety of the holy relics relating to the Kaba increased continuously over the centuries. Those relics to be brought to Istanbul were meticulously registered and delivered to the officials in charge of transferring them. They were preserved with utmost care and respect for centuries. The holy relics were opened for public view in 1962.

This book contains the critical edition of an original copy of the Holy Quran attributed to the time of Caliph Othman: this is the copy known as the “Othman (R.A.) Mushaf [Quran copy]” located in the Topkapı Palace Museum. manuscripts of the Holy Quran that reached to the present day.

Dr. Altıkulaç has done a meticulous comparative study and technical analysis of the copy; the Introduction explains the method followed and the findings obtained. Dr. Altıkulaç further enriches this instructive text with information on the history of Quran copies and recitation of the Quran. With only two pages (23 verses) lacking, “Topkapı Mushaf ” is the closest to the complete text of the Quran. As indicated in detail and with examples in the text of Dr. Altıkulaç, certain parts of the manuscript had become unreadable due to the effects of time.

With patient and careful research, Dr. Altıkulaç was able to decipher these parts using certain criteria and signs and to reconstitute the original copy. The funding for the printing of this book was provided by H.H. Sheikh Dr. Sultan bin Mohamed al-Qassimi, Member of the Supreme Council of the U.A.E. and Ruler of Sharjah. Publication of Dr. Tayyar Altıkulaç’s work represents at the same time the concretisation of a goal which was formulated by Prof. Ekmeleddin İhsanoğlu in the early 1980s, to print an edition of the “Topkapı Mushaf ”, given the value and importance of this copy.