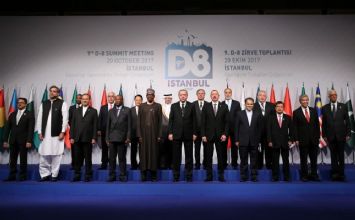 9th Leader’s Summit of the D-8 Organization for Cooperation was held in Istanbul on October 20th, 2017

9th Leader’s Summit of the D-8 Organization for Cooperation was held in Istanbul on October 20th, with the theme of “Expending Opportunities with Cooperation”. With the 9th Summit, the Chairmanship rotated to all the Member States and returned to Turkey, marking the second phase of the of the rotation of the Chairmanship in the history of Cooperation.
Aiming to improve member states’ position in the global economy, diversify and create new opportunities in trade relations, enhance participation in decision-making at international level, and improve standards of living, the D-8 Organization Summit was chaired by President of Turkey HE Mr. Recep Tayyip Erdoğan as Turkey assumed D-8 Council Charimanship for the second time. Minister of State for Foreign Affairs of Bangladesh HE Mohammed Shahriar Alam, Deputy Foreign Minister of Egypt HE Hamdi Loza, Indonesian Vice President of Indonesia HE Jusuf Kalla, First Deputy Prime Minister of Iran HE Ishak Cihangiri, Prime Minister of Malaysia HE Ahmad Zahid Hamidi, President of Nigeria HE Muhammadu Bukhari, Prime Minister of Pakistan HE Shahid Khaqan Abbasi, Minister of Economy and Trade of Turkey HE Nihat Zeybekçi, Minister of Science and Industry of Turkey HE Faruk Ozlu, Minister of Culture and Tourism of Turkey HE Numan Kurtulmuş and state and government officials as well as the President of Azerbaijan HE Ilham Aliyev and the President of Guinea HE Alpha Condé and numerous top diplomatic representatives attended the summit. HE General Secretary of the Organisation of Islamic Cooperation Dr. Mr. Yousef bin Ahmed al-Othaimeen and IRCICA Director General Dr. Mr. Halit Eren has also participated in the event.
The co-operation report prepared by the experts at the D-8 Commission meeting held on the first day of the Summit was accepted by the participating leaders.