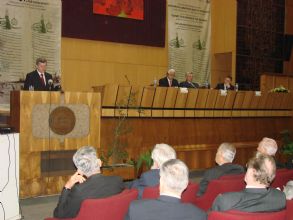 The Fourth International Congress on Islamic Civilisation in the Balkans (Skopje, capital city of Macedonia) was opened on 14 October 2010 under the patronage and in the presence of the President of Macedonia H.E. Mr. George Ivanov. The congress was organized jointly by IRCICA and the Macedonian Academy of Sciences and Arts (MANU). The Secretary General of OIC H.E. Prof. Ekmeleddin İhsanoğlu was present at the opening ceremony of the congress. An audience from universities, cultural and academic circles attended the ceremony.

The Skopje congress underlined on the whole the reality of multi-faith coexistence in the past and the present in the Balkans, in Macedonia in particular.

In his opening address Prof. Georgi Stardelov, President of MANU, emphasized that the foundations of the culture of tolerance were laid during Ottoman times and that the togetherness thus created will be preserved eternally. He said there can be no peace without inter-faith understanding and dialogue.

The Chairman of the Islamic Religious Community in Macedonia, Haji Sulejman Rexhepi said that in Macedonia there are about 700 mosques and historical monuments dating from Ototman times and that this heritage needs to be preserved.

The Ambassador of Turkey in Skopje Mr. Gürol Sökmensüer expressed his thanks to the President of Macedonia George Ivanov on the occasion of the congress for the President’s close attention to matters relating to Turks living in Macedonia and to the preservation of the Ottoman cultural heritage there.

The Director General of IRCICA Dr. Halit Eren recalled that the congress was fourth in the series organised by IRCICA under the title Islamic Civilisation in the Balkans after the first three, which were held in 2000, 2003 and 2006, in Bulgaria, Albania, and Romania, respectively. But, he said, “it is the first in other respects because it materialised, for the first time in this field of studies, a cooperation scheme between OIC-IRCICA representing fifty-seven countries, on one hand, and Macedonia on the other, with participation from all Balkan countries and from all over the world.” He said that studies on the history of the Balkans had seen considerable progress thanks to the attention directed to them through such cultural and academic activities as the present congress.
Prof. Ekmeleddin Ihsanoğlu, Secretary General of the OIC, paid a special tribute to H.E. President Gjorge Ivanov, for honoring this meeting with his presence and active participation in his capacity as the President of Macedonia as well as an established academician. He thanked and praised the efforts of the Macedonian Academy of Science and Art and IRCICA. The Secretary General said that most countries of the world are affected and shaped by their geographical locations. “The Balkans in general, and Macedonia in particular are impacted by their geographic positions at a crucial crossroad linking the Balkan with Asia minor and beyond, from one side, and Central and West Europe from the other. It is said that the contacts between the Balkan Nations and the Arab and Muslim worlds go back to the Eighth Century and even before the Christian era. … From the available studies regarding the quick embracing of Islam in the Balkans, one can see that those Balkan peoples who embraced Islam found in Islam many values and a way of life that suited them and delivered them from harsh circumstances they were suffering from before the Ottoman rule.” In this regard he quoted the European historian Stavrianos who wrote that “the Islamic religion itself was the main factor for the quick and large acceptance of Islam.” The Secretary General said that the OIC has two Balkan countries as OIC Members, Albania as a full member and Bosnia and Herzegovina as an observer. He expressed the hope that new conditions in the Balkans will revitalize the historically acclaimed peaceful coexistence and make it a reality of the 21st century.

In his comprehensive inaugural address the President of the Republic of Macedonia H.E. Mr. Gyorge Ivanov emphasized that the cultural heritage of the Balkans, in every historical period, has testified to the complexity of life built by different people, different religious, ethnic and linguistic communities. Revieweing the periods of turmoil, instability “Two centuries prior to the collapse of Byzantium, the Balkans suffered from political instability and internal fights between the Greek, Slavic, Venetian rulers and owners. In such an atmosphere did the Ottomans and the Islamic civilization come in the Balkans. In many national histories in the Balkans, the advent of Islam and the Ottoman rule is interpreted as the beginning of a new dark period of the Balkans the Christians will never fully recover from. However, the historical facts indicate something totally different. For example, as Mark Mazover states, an expert very well familiar with the Balkan situation: the old rulers were replaced with new one. The Ottoman soldiers (both Muslims and Christians) were rewarded with property and some of the old Byzantine duties were still being practiced. Reputable Greek and Slavic families converted to Islam and became part of the Ottoman elite, some succeeded, for a short time, to retain their property without having to change their faith. The endless wars that raged in the XIV century on the Balkans were replaced with stability brought by the organized Ottoman state. … In the 18th and 19th centuries the situation was changed. Uprisings began, new states were established. Again, there were new divisions and the Balkans became a space hard to define. After acknowledging Islam, the Balkan nations had started to think in a more tolerant way of people of other religions and different political affiliations. And there was a reaction with a desire for self-preservation. The feeling of belonging to a community and the heroic deed incentive were strengthened. This had an influence on literature, especially love poetry, folklore and epics.” President Ivanov said that in Macedonia, coexistence between Christianity and Islam can be seen almost everywhere, in the common sacred places, where both Christians and Muslims pray to God together, in the tradition of joint celebration of the most important religious holidays. “In the National Assembly, in the Government, in certain municipalities, senior officials and ordinary employees of different religions work together. … We are experiencing renewal of the religious feelings of our citizens, Christians, Muslims, Jews. This natural reaction means return to some forgotten values, and an attempt to find new answers to modern times. It is understandable that there are reactions, sometimes concern deriving from the restoration and the new forms of religious life in Macedonia. Therefore, we must know each other better, insist on the notion that respect for one’s own religion is not an act directed against someone else. As is freedom of citizens who do not belong to a particular religion, who certainly have the right to act contrary to religious rules, cannot and may not be understood as an attack on religion. Macedonian multiethnic and multi-confessional character does not mean that the construction of religious temples should be limited, or studying the religions should be restricted, so as not to offend the others. On the contrary, this means freedom to celebrate religion, as well as freedom not to celebrate any religion. Certainly, religion may not be imposed, and may not intimidate. To be vital, the system of belief must be open and provide an opportunity to the believers to answer adequately to the question of doubt. A strong religion does not force its believers; a strong religion attracts believers like a light in the night. Our outstanding contribution as a country in which religions, traditions and various ethnic groups cooperate in building a common home and are in quest of answers to certain eternal questions, is a proof that a better future for the region, Europe and the world is possible.”

The opening ceremony was followed by a plenary session where scholarly addresses were given by Prof. Georgi Stardelov (“Historic Meeting of Civilisations and Cultures in the Balkans”), Dr. Behijuddin Shehapi from the National Conservation Centre for Cultural Heritage, Skopje (“Islamic CulturalHeritage in Macedonia”), Dr. Halit Eren (“Pax Ottomana” in the Balkans”), President George Ivanov (“The Millet System in the Ottoman Empire”), and Prof. Ekmeleddin İhsanoğlu (Concluding Remarks).

An Archaeological Exhibition, by Mr. Dragi Mitrevski-Dragica Zivkova, entitled “From the Ottoman Culture on the Skopje Castle” was opened the same day.

The sessions heard 125 papers which were selected from among 300 applications. The presentations were related to the spread and evolution of Islamic culture in the Balkans, religious coexistence, educational and cultural institutions, science and technology, architecture and urbanism, arts, social life and traditions, state and preservation of tangible and intangible Islamic heritage, academic cooperation in Balkan studies, problems encountered, issues relating to dissemination of new research, aong others.