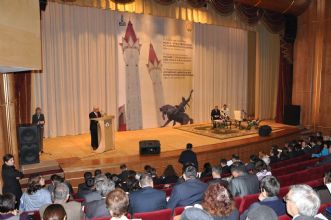 IRCICA’s Fourth International Congress on Islamic Civilisation in Volga-Ural was organised jointly with the Ministry of Education and Science of the Russian Federation, the Government of Bashkortostan, and Bashkir State University, in Ufa, Bashkortostan, on 21-22 October 2010.

A total of 140 papers were accepted for the fourth congress; due to time limitations only 82 of them were presented but all others will be taken into consideration for publication. There were participants from Germany, India, Italy, Kazakhstan, Lithuania, the Russian Federation, Tatarstan (Russian Federation), Turkey, Turkmenistan, USA, Uzbekistan.

Vice Prime Minister Prof. Rakhmatullina underlined the importance of throwing light on the lesser known aspects of the deep-rooted Islamic civilization in Volga-Ural region, a subject which maintains its actuality in our time. She cited some of the late Islamic sholars, who, she said, were helping society preserve its moral and cultural values, including Miftakhetdin Akmulla, Muhammed Salim Umetbaev, Ziya Kamali, Zaynulla Rasulev, Mufti Rizaeddin Fahretdinov among others. Bashkortostan Republic upholds a policy of tolerance and support of the population’s ethnic and religious diversity.

The Secretary General of OIC Prof. Ekmeleddin Ihsanoğlu pointed out that Russia’s relations with Islam and the Muslim world are deep seated and rooted in geography and history. “It is important to understand that Islam spread in Russia mainly amicably and peacefully. Muslims form a significant component of the population in the Russian Federation; Russian Muslim communities are a bridge between the Muslim world and the Russian Federation. Today after five years of Russia joining OIC as observer member we can say that relations between Russia and the Muslim world are progressing in all fields. It is indeed heartening to see that since the end of Soviet era, Islam has gained wider public prominence. Muslims have engaged in a recovery of their national and cultural heritage; mosques have been reopened or rebuilt, and contacts with other Muslims established.”

Mufti Talgat Tadzhutdin pointed to the importance of the close relations established between the Muslim world and Russia in recent years and thanked OIC Secretary General Prof. Ihsanoğlu for his endevaours towards strengthening the OIC’s cooperation with the Religious Board of Russian Muslims. “As is known, Bashkortostan has a significant place in the history of Russian Muslims and also today. The Religious Board of Russian Muslims was founded 220 years ago in Bashkortostan at the order of Czarina Catherine II. Islamic scholars of world renown came from Volga-Ural region such as Abu an-Naser al-Kursavi, Shikhabuddin Mardjani, Musa Bigieev, Rizaetdin ibn Fakhretdin, Gabdulla Tukai, Miftakheddin Akmulla, Zaki Validi Togan and the muftis and qadis who served in the Religious Board of Russian Muslims. … From the 1980s onwards new cadres were formed in Bukhara and Tashkent, new mosques were built, the madrasa named after Rizaetdin ibn Fakhretdin was opened, it became an institute later in the 1990s and presently serves as the Russian Islamic University.” The Mufti underlined that the different faiths and cultures of Russia and particularly Bashkortostan do have the understanding and the experience to coexist respectfully of each other’s values.

Dr. Halit Eren expressed his satisfaction that in addition to the academic benefits it offered, holding of the congress in Bashkortostan created a good opportunity to highlight the share and place of this country in the history of the diversity of peoples, cultures, and faiths of Russia in general and the history of Volga-Ural region in particular. He pointed out that “research interest in the history and culture of the region is now heightened, literature is growing in diverse social disciplines, research methodology is systematised and the body of references is being consolidated.”

The Plenary Session heard the following presentations: Dr. Rakhmatullina Zugura Yaganurovna, Deputy Prime Minister of the Government of the Republic of Bashkortostan, spoke of: “Jadidism and Bashkir enlightenment: Consonance of Culturological Attitudes”; Prof. Shingarov George Christovich from the Modern Humanitarian Academy, Moscow, presented a talk titled “Philosophy and theology: the common and the different in the subject of research”; Prof. Yunusova Ayslu Bilalovna, ERI USC RAS, Ufa, on: “Islam in South Ural: Archives, sources, information resources”; Prof. Mehmet İpşirli from Fatih University, Department of History, Istanbul, titled his talk “My Hodja Zeki Velidi Togan”; Prof. Kulsharipov Marat Makhmutovich, from Bashkir State University, spoke on “Some issues related to spreading of extremism and terrorism among Muslims”; Prof. Teyfur Erdoğru, Yıldız Technical University, İstanbul, on “The Impact of Zeki Velidi Togan on Turkish Historiography in the Early Republican Area in Turkey” Prof. Nabiyev Rinat Akhmatgaliyevich from Kazan Federal University, Tatarstan, on “Interconfessional tolerance as a factor in sustainable development of society: an opinion from Tatarstan”; Prof. Abdurakhmanov Makhamadzhon Abdurakhianovich, from Uzbekistan National University, Tashkent, on “A. Z. Validov’s archaeographical work in Turkestan”; Prof. Mazhitov Niyaz Abdulkhakovich, Vice-President of the Academy of Sciences of the Republic of Bashkortostan, on “A. Z. Validi on the origin of Bashkir people”, and Assoc.Prof. Kydyralina Zhanna Urkinbayevna, State History Institute of the Ministry of Education and Science of Kazakhstan, Astana, on “Power and Islam in Kazakhstan in the 1920s”.

Workshop 3. Islamic civilization legacy in the material culture of the region (23 presentations)

Workshop 5. Problems and prospects of studying Islamic civilization influence on the peoples of Volga-Ural region (17 presentations).

Parallel to these sessions, a “Conference Dedicated to Ahmed Zek Validi’s 120th Anniversary” was organized, on 22 October. Twenty papers were presented highlighting Ahmed Zeki Validi Togan’s activities and different aspects of his works and scholarship. Studies on the history of the region had gained impulse after the travel book of the Abbasid diplomat Ibn Fadlan dating from 921 became available thanks to the discovery of its copy by Zeki Velidi Togan. After its first publication in 1939 in German the book was translated into various languages, among them its Turkish translation by Professor Ramazan Şeşen (IRCICA) which was first published in 1975. Togan, who was of Bashkir origin, immigrated to Turkey in 1925.