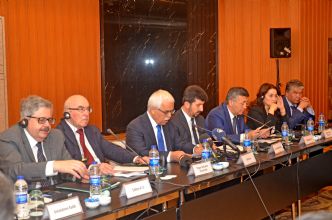 International Round Table on "Cultural Interactions and the Heritage of Chingiz T. Aitmatov" Istanbul, 24 March 2018

An International Round Table on "Cultural Interactions and the Heritage of Chingiz T. Aitmatov" was organized by IRCICA jointly with the Group of Strategic Vision "Russia-Islamic World" and the Writers Union of Turkey, with the cooperation of the Ministry of Culture of the Kyrgyz Republic and the Muras Foundation of the Historical and Cultural Heritage of the People of Kyrgyzstan under the Office of the President of the Kyrgyz Republic. The meeting underscored the theme of international cultural interactions on the occasion of the 90th birth anniversary of Chingiz T. Aitmatov, the eminent Kyrgyz author cited among the first three most widely read of the world according to UNESCO data, at the same time a statesman and diplomat having contributed to international cultural exchanges and dialogue and taken part in the establishment of the Group of Strategic Vision "Russia-Islamic World".

The meeting was held in the presence of Ambassador Dr. Venjamin Popov, Coordinator of the Group of Strategic Vision "Russia-Islamic World", Mr. M.K. Satarovich, former Minister of Culture, currently Advisor to the President of the Kyrgyz Republic and Chairman of the Muras Foundation of Kyrgyz Republic; Mr. Askar Aitmatov, former Minister of Foreign Affairs of Kyrgyzstan and son of Chingiz Aitmatov; Mr. M.S. Shoislamovich, Director of the Centre for Islamic Civilization under the Cabinet of Ministers of the Republic of Uzbekistan; Mr. A. Aidar, Director, International Center for Cultures and Religions, Ministry of Religious Affairs and Civil Society, Republic of Kazakhstan; Ms. L. Fazleeva, Deputy Prime Minister of Tatarstan (Russia), Mr. R. Valeev, Deputy of the State Council and People’s Poet of Tatarstan (Russia); Prof. Sami Güçlü, former Minister, Turkey; the Ambassador of the Russian Federation to Turkey; the Ambassador of the Kyrgyz Republic to Turkey; Heads of Writers Unions of Russia, Chechnia (Russia), Kyrgyzstan and Turkey; heads of libraries, heads of museums, literary critics and journalists from various countries.

Thus the Round Table received scholarly contributions from a total of 35 representatives and participants from Kazakhstan, Kyrgyzstan, Russian Federation, Uzbekistan and Turkey. In his inaugural address, Dr. Halit Eren, Director General of IRCICA stated that one of the world’s regions which saw fastest progress of cultural interactions in recent decades is that of the OIC Member States Kyrgyzstan, Uzbekistan, Turkey and OIC’s Observer State the Russian Federation on one hand, and the entire OIC membership on the other. Dr. Eren said that Muslims of Russia, Central Asia and the Turkic world share common historical processes with the other Muslim countries, similar features of language, social traditions and faith. These factors contribute to their common historical memory and promote present cultural relations. They found realistic humanitarian interpretations in the writings of Aitmatov, whose writings about the shared memory of his region reflect conditions and experiences shared by all peoples of similar cultures and traditions. Addressing the opening session, Ambassador Dr. Venjamin Popov, Coordinator of the Group of Strategic Vision "Russia-Islamic World", underlined the significance of the meeting as an international scholarly event on its own and within the cooperation between Russia and the Islamic world. Mr. R. S. Akimovich, Adviser to the President of the Kyrgyz Republic, read the message of Kyrgyz President S. Jeenbekov. Mr. R. Gimatdinov, Adviser to the President of Tatarstan (Russia) read the message of Tatar President R. Minnikhanov. Prof. M.K. Arıcan, Chairman of the Writers Union of Turkey, delivered an address. The Ambassador of the Russian Federation and the Ambassador of the Kyrgyz Republic also addressed the opening session.

During three working sessions, the speakers presented results of studies on the literary importance and international impact of Aitmatov’s works, which have been translated into more than 150 languages. Focuses were given during these presentations to different aspects of his authorship, including his philosophy, his spirituality and his humanism and their role in encouraging social harmony within societies and affinities between different peoples; his reflecting the social memory of his region and the peoples of the region; the place and role of his works in the Islamic culture and civilization; the theme of tradition and modernity; the theme of inter-faith communications; cinematographic interpretations of Aitmatov’s novels in different countries, among others.

The International Round Table constituted a significant event within the framework of IRCICA’s cultural cooperation with the collaborating States and with the Group of Strategic Vision "Russia-Islamic World".