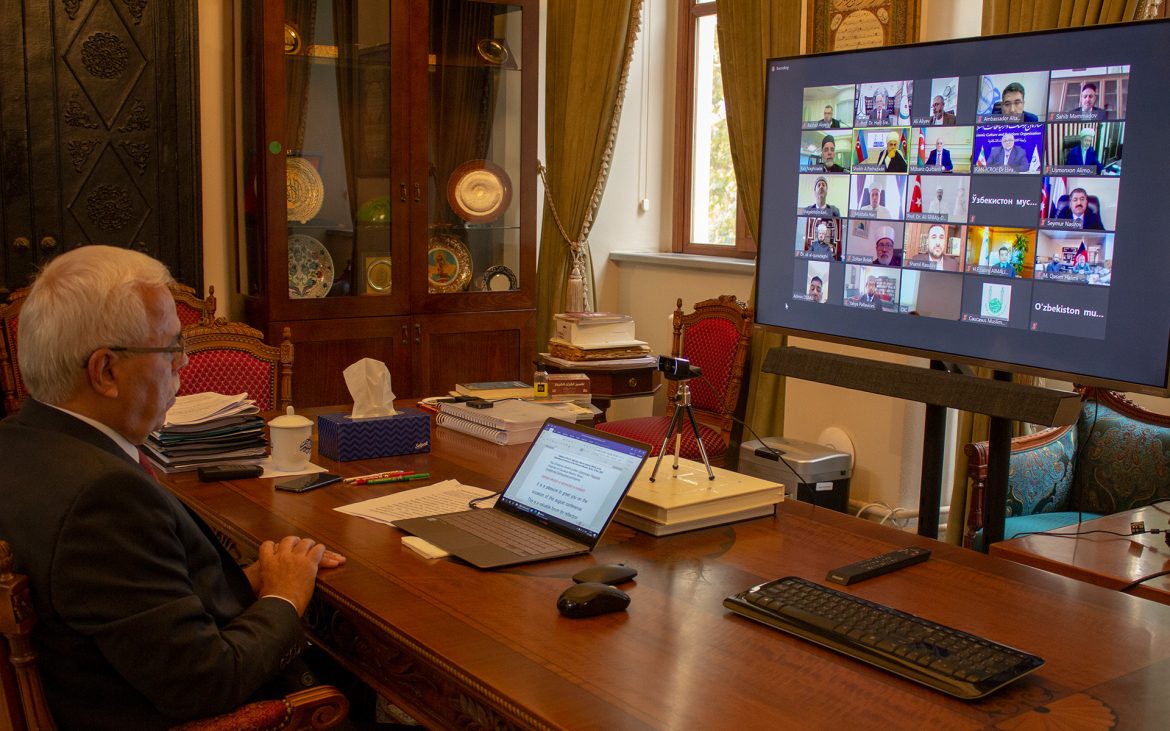 An international online conference was organized by the Caucasus Muslims’ Board, Azerbaijan, on 10 November 2020 on “Problems facing the present-day world: Hate speech, terror, extremism, Islamophobia and the aggression of Armenia against Azerbaijan” addressing the pressing problems posed by continuing religious discrimination, intolerance, xenophobia and Islamophobia manifested in various parts of the world and defamation of sacred values of Muslims under the pretext of freedom of expression. The conference was attended by H.E. Sheikh-ul-Islam Allahshukur Pashazade, Chairman of the Caucasus Religious Board; Mr. Marghoob Saleem Butt, Special representative of the OIC Secretary General H.E. Dr. Yousef b. Ahmad Al-Othaimeen, presidents of religious affairs and heads of religious organizations from OIC member countries, heads and representatives of Muslim communities from around the world.

Prof. Dr. Halit Eren, Director General of IRCICA, delivered an address at the Conference stressing the multiple problems that disrupt peace, welfare and security across the world and the continuing pandemic all of which point to humanity’s shared destiny. Despite all this, chronic problems of inter-cultural and inter-faith hatred, political conflicts and armed aggressions continue to prevail. Referring to the repeated aggressions of Armenia over Azerbaijan and occupation of Azerbaijan’s territory, Prof. Eren pointed out that the global political environment that surrounded this crisis carried several examples of double standards and lack of fair and proper reaction on the part of world community to the aggressions and the occupation which were fueled by inter-faith and intercultural prejudice and discrimination. Prof. Eren expressed his heartfelt congratulations to H.E. the President and the people of Azerbaijan on their victory in liberating their territory and their cities sealed by an agreement that very same day, 10 November. Prof. Eren said that within the framework of the OIC’s firm stance on this problem over the past years, the OIC’s cultural center IRCICA gave special coverage to the issue under its aspects that come within its mandate, that is, the Islamic cultural heritage located in the occupied region of Karabagh. One of IRCICA’s objectives regarding this severe situation was to raise awareness in world opinion and promote architectural studies on monuments and artefacts located in that region. An international experts’ workshop was organized jointly by the Ministry of Culture of Azerbaijan, Azerbaijan National Academy of Sciences, and IRCICA on “Karabagh: History and Heritage”, in November 2016. The subject was underlined in all pertinent contexts and cultural forums.

IRCICA Director General also spoke of the problems of extremism and Islamophobia with special reference to the publication of defamatory cartoons about the Prophet of Islam SAW which is unacceptable under any pretext or in any context. He said that freedom of thought and expression must be conducive to mutual respect and coexistence, not to separation and tension. Prof. Eren then outlined the activities IRCICA undertook through its research projects which are conducted in partnership with the Member States’ institutions and international and regional organizations, its training programs, academic forums, art and architectural competitions, cultural heritage preservation programs, that provide scholarly and cultural information to global community about the Islamic civilization and Muslim world. Prof. Eren referred in particular, to IRCICA’s efforts to combat extremism and Islamophobia, citing examples of the international meetings it organized and reports it published to analyze root causes of these problems and recommend solutions.

The conference adopted a Statement on “Problems facing the present-day world: Hate speech, terror, extremism, Islamophobia and the aggression of Armenia against Azerbaijan”.