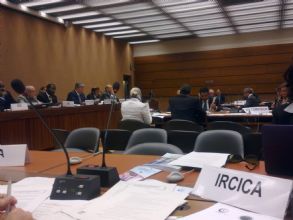 IRCICA Participated in the UN-OIC Coordination Meeting held in Geneva, 1-3 May 2012

Pursuant to General Assembly resolutions 50/17 of 20 November 1995 and 65/140 of 16 December 2010, the General Meeting on Cooperation between the Secretariats of the United Nations (UN) and the Organization of the Islamic Cooperation (OIC) and their specialized organizations and agencies took place in Geneva from 1-3 May 2012.

II. GENERAL OBSERVATIONS AND OUTCOME OF THE MEETING

Participants of the meeting welcomed the continuation of the strengthening of cooperation between the UN and the OIC in a diverse array of areas including the maintenance of international peace and security; economy, science and technology; and cultural and social issues. There was also a strong sense that the increasing and widespread calls for meaningful political, economic and social reforms in the Arab and Islamic world, particularly since the beginning of 2011, had created a changed context. As a consequence, participants expressed the view that both the work of the UN and the OIC as well as their cooperation needed to be adjusted to new realities.

The meeting took note of the Follow-up Report (2010-2012) on Cooperation between the UN and the OIC presented by the OIC. Both Organizations stated their commitment to pursue and reinforce cooperation in all areas of common interest, such as political, inter-cultural dialogue, the fight against terrorism, economic, humanitarian, science and technology, human development, social, cultural, human rights, and refugees.

During the discussions a number of key themes for further enhanced cooperation between the UN and the OIC emerged. These included the need and good potential to 1) collaborate more closely on promoting peace and security in different contexts – from conflict prevention to peace building, from peacekeeping to peacemaking peace processes in OIC countries, such as Afghanistan, Syria, Somalia, Yemen, and the Occupied Palestinian Territory; 2) addressing urgent humanitarian needs in OIC countries affected by man-made or natural disasters or by violent conflict, 3) more concerted efforts to mobilize resources for priority activities of both organizations, 4) foster economic and social reforms, and 5) promote intercultural dialogue .

The meeting agreed for the first time on a "Matrix of Activities within the Framework of UN-OIC Collaboration". The matrix describes concrete projects of cooperation that UN and the OIC commit to implement over the next two years and determines objectives, participating UN and OIC agencies, and timelines. The Matrix will also form the basis of the next report on UN-OIC cooperation that will be presented at the next general UN-OIC meeting in 2014, which the OIC agreed to host in Istanbul, Turkey.

Strengthen intercultural dialogue and cooperation 1) Strengthen dialogue with all relevant institutional and civil society actors on the building of pluralist and inclusive societies, (in particular through the UNAOC platform);

2) Support the adoption of UNAoC national and regional plans for intercultural dialogue and cooperation;

5) Step up programs that promote mutual knowledge and respect, including through the review of history books;

1) Countering incitement and enhancing cultural dialogue 1) Follow up of the resolution of UNHRC No. 16/18;

2) Enhanced dialogue among cultures including but not limited to activities such as:

1) To work together in collaboration with other partners on a Plan of Action to address various aspects of the so-called "West- Muslim";

2) Strengthen coordination in combating intolerance, stereotypes, prejudices, discrimination and distortion of history, with a view to consolidating democratic institutions and human rights.

3) Implementation of projects on preservation of cultural heritage

Development of Arts, Crafts and Promotion of Heritage 1. Set up a "Book Hospital" at the historical Suleymaniye Library in Istanbul

3. To preserve architectural and urban conservation

4. To involve workshops, training programs and architectural schools attended by professors and students from various cultural backgrounds and role of history teaching in improving intercultural relations;

5. To propose a congress on Legal Protection of Arts and Crafts

6. To enhance a new series to be devoted to the ‘Architectural Heritage of Al-Quds and Palestine’ GS/DCA, IRCICA, ISESCO UNESCO

Innovation and  Promotion 1) Holding a regional seminar on the

Intellectual Property in collaboration with the Turkish Patent Institute

2) Organizing a training Program on Innovation and Promotion with the Moroccan Industrial and Commercial Property Office (OMPIC) in Casablanca in 2013 and in the matter of geographical indications. ICDT, IRCICA

Promoting Tourism for sustainable development 1. Mobilization of funds for the Regional Project on Sustainable Development of Tourism in a Cross-Border Network of Parks and Protected Areas in West Africa

2. Promoting the role of cultural tourism in development ICDT, ISSF

Reviewing implementation of the UNAOC High Level Group Report to UNSG in November 2006 1) To work together in collaboration with other partners on a Plan of Action to address various aspects;

2) Strengthen coordination in combating intolerance, stereotypes, prejudices," discrimination and distortion of history, with a view to consolidating democratic institutions and human rights.

3) Implementation of IRCICA project on protection of cultural heritage.

4) Implementation of IRCICA-UNAOC project on review of history books. GS/CSA