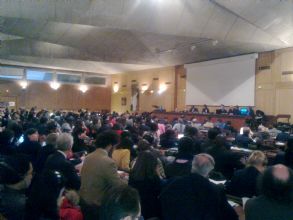 The seventh session of the Intergovernmental Committee for the Safeguarding of the Intangible Cultural Heritage took place at UNESCO Headquarters, Paris, from 3 to 7 December 2012.  More than 800 participants including experts, practitioners and government officials from more than 110 countries participated in this meeting.  They reviewed the stock of the world’s intangible cultural heritage and the global measures underway to safeguard it.  Dr. Halit Eren, Director General of IRCICA nominated Dr. Nezih Maruf, Head of the Crafts Development Program to represent IRCICA in this meeting.  The meeting provided a unique opportunity for exchanging views on common concern points of cooperation with representatives and experts of some OIC Member States as well as introducing the latest activities of IRCICA to them.

The sixteen new periodic reports from States Parties were examined by the Committee and it provided enlightening information on the importance of strengthening national capacities for safeguarding intangible cultural heritage, in particular the training of government staff and NGOs for effective implementation of the Convention.

During this session, the Committee has also inscribed four elements on the List of Intangible Cultural Heritage in Need of Urgent Safeguarding and twenty seven elements on the Representative List of the Intangible Cultural Heritage of Humanity. It has also selected two safeguarding programmes for the Register of Best Practices and granted four international assistance requests totaling US$ 660,000.

A number of matters pertaining to the experience gained in implementing the referral option of the Representative List, the right scale or scope of an element, the procedure for extended inscription of an element that is already inscribed, and the use of the emblem of the Convention were also discussed by the Committee.

The 24 members of the Intergovernmental Committee for the Safeguarding of Intangible Cultural Heritage took stock of the progress made by States Parties on the legal, regulatory or other measures taken to safeguard intangible cultural heritage in their countries.

The meeting aimed to Preserve Art, Craft, Folklore and Traditions. Intangible cultural heritage encompasses practices and living expressions handed down from one generation to the next.  These living traditions are constantly recreated by communities in response to their environment, their interaction with nature and their history.  This dynamism is precisely what makes culture such a powerful force for dialogue, exchange and understanding between peoples.  Safeguarding living traditions helps to harness the power of cultural diversity for more cohesive societies and a more peaceful world.  It is an important way to support practices that are vital for achieving the Millennium Development Goals and to set strong foundations for sustainable development.

UNESCO has led the way in expanding the definition of cultural heritage, which was long considered as being limited to monuments and works of art. For UNESCO, cultural heritage must encompass not only historic vestiges but also all living culture.

The following elements is a list of the intangible heritage applications approved of some of the OIC Member Countries:

Earthenware pottery-making skills in Botswana’s Kgatleng District, Botswana – Women of the Bakgatla ba Kgafela community of Botswana practice earthenware pottery-making skills using clay soil, weathered sandstone and other materials to make pots of different forms, designs and styles that relate to the traditional rituals and beliefs of the community.

Noken multifunctional knotted or woven bag, handcraft of the people of Papua(Indonesia) – Noken is a knotted net or woven bag handmade from wood fibre or leaves by communities in Papua and West Papua Provinces of Indonesia. It is used for carrying produce, catch, firewood, babies or small animals as well as for shopping and for storing things in the home. Noken may also be worn or given as peace offerings. The number of people making and using Noken is diminishing, however, in the face of competition from factory-made bags and problems obtaining raw materials.

Ala-kiyiz and Shyrdak, art of Kyrgyz traditional felt carpets, Kyrgyzstan – Traditional felt carpets represent one of the foremost arts of the Kyrgyz people. The knowledge, skills, diversity, ornamentation and ceremonies involved provide Kyrgyz people with a sense of identity and continuity. Their creation is a communal enterprise led by older women in rural, mountainous areas, but the tradition is in danger of disappearing.

Bigwala, gourd trumpet music and dance of the Busoga Kingdom, Uganda – The Basoga people of Uganda traditionally practice Bigwala music and dance during royal celebrations and social occasions. A set of five or more monotone gourd trumpets are blown in combination, accompanied by drum players, singers and dancers. Song lyrics narrate the history of the Basoga people, focusing in particular on their king. At present, there are only four remaining older master bearers with skills in Bigwala performance.

Rites and craftsmanship associated with the wedding costume tradition of Tlemcen, Algeria – During the wedding ritual of Tlemcen in northwestern Algeria, the bride is dressed in a traditionally woven golden silk dress, surrounded by her friends and married female relations; symbolic henna designs are applied to her hands, and an older woman helps her don a caftan of embroidered velvet, jewelry and a conical hat. Girls in Tlemcen are initiated into the costume tradition at an early age, while the craftsmanship involved in making the precious wedding costume is transmitted from generation to generation.

Craftsmanship and performance art of the Tar, a long-necked string musical instrument, Azerbaijan – The Tar is a long-necked plucked lute crafted and performed throughout Azerbaijan. It features in numerous traditional musical styles and is played at weddings and socials gatherings, festive events and concerts. The hollow body, made of mulberry wood, is shaped in the form of a figure eight and is held horizontally, while the eleven metal strings are plucked with a plectrum. Craftspeople pass on their skills to apprentices, and players transmit their skills by word of mouth and demonstration to young people within their community.

Qālišuyān rituals of Mašhad-e Ardehāl in Kāšān, Iran – Qālišuyān rituals commemorate Soltān Ali, a holy martyr among the people of Kāšān and Fin. According to legend his body was found and carried in a carpet to a stream where it was purified. Qālišuyān takes place at the Soltān Ali mausoleum where a carpet is washed in a holy stream by a huge gathering. People of Xāve gather to sprinkle rosewater on the carpet, which is then delivered to the people of Fin, who rinse it in running water, and sprinkle rosewater drops with decorated wooden sticks.

Cherry festival in Sefrou, Morocco – For three days in June each year, the local population of Sefrou celebrates the natural and cultural beauty of the region, symbolized by the cherry fruit and that year’s newly chosen Cherry Queen. The highlight of the festival is a parade with performing troupes, rural and urban music, majorettes and bands, and floats featuring local producers. The cherry festival provides an opportunity for the entire city to present its activities and achievements.

Al ‘azi, elegy, processional march and poetry, Oman – Al ‘azi is a genre of sung poetry performed in the Sultanate of Oman. It takes the form of a poetry contest punctuated by sword and step movements and poetic exchanges between a singer poet and a choir. The poet, who recites improvised and memorized poems in Arabic, guides the other participants. They must pay attention to his movements and recitation, and respond with appropriate replies and movements. The poems express pride of belonging and eulogize the tribe, important people or historical moments.

Al-Taghrooda, traditional Bedouin chanted poetry in the United Arab Emirates and the Sultanate of Oman – Al-Taghrooda traditional Bedouin chanted poetry is composed and recited by men travelling on camelback through desert areas of the United Arab Emirates and the Sultanate of Oman. Bedouins believe that chanting entertains the riders and stimulates animals to walk in time. Short poems of seven lines or less are improvised and repeated between two groups of riders often as antiphonal singing. Generally the lead singer chants the first verse and the second group responds. Poems are also chanted around campfires, at weddings, and at tribal and national festivities, particularly camel races, and some Bedouin women compose and chant while engaged in collective work. The most important aspect is the social bonding during the oral exchange of verses. Themes include sending messages to loved ones, relatives, friends or tribal chiefs. It is also a medium for the poet to pass comment on social issues.