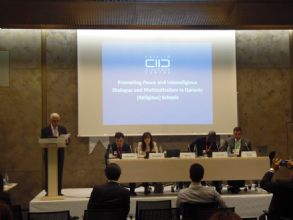 The 7th Global Forum of the United Nations Alliance of Civilisations took place in Baku, capital city of Azerbaijan, on 25-27 April 2016. The motto of the 7th forum was “Living Together in Inclusive Societies: A Challenge and A Goal”. The forum programme included plenary sessions, breakout sessions and networking sessions on numerous current issues of concern for work community with regard to peace, security and development; mainly, promoting inclusiveness and integration in a multicultural world and countering violent extremism and terrorism (baku.unaoc.org).
The high-level meeting of the UNAOC Group of Friends held on 26 April 2016 within the framework of the forum endorsed the Baku Declaration, which covers all matters on the UNAOC agenda, the related goals and objectives adopted and policy measures recommended. The meeting was addressed by heads of state and government and heads and representatives of international organizations from all continents. In his statement, IRCICA Director General Assoc. Prof. Dr. Halit Eren emphasized the need to develop and promote a pluralistic social vision and culture around the world in order to eradicate the potentials of polarization, exclusion, discrimination and conflict. He pointed to some needs and impediments faced in the realization of UNAOC objectives by world community. He recommended in this regard that evaluation criteria and indicators be attached to the objectives, specificity be brought to some objectives perceived as too general, wider participation of countries in the Alliance’s sessions and projects be ensured, and geographical focuses of the Alliance activities be diversified, among others.

The Networking Session organized by IRCICA on 27 April 2016, titled “Promoting multicultural perspectives to prevent violent extremism”, aimed to generate an exchange of experiences, and foster reflection, on practical policies and strategies implemented to diffuse, encourage and activate cultural multiperspectivity and pluralism in societies. It proposed a discussion on such topics as:
– Working towards definition of pluralism and multiperspectivity as attitudes and methods, in terms applicable to different positions/conditions
– Defining areas of action for applying cultural multiperspectivity toward prevention and elimination of violent extremism, including the areas of academic research, education, social and family development, community management, information media, among others
– Suggesting ways of integrating pluralistic approaches with development, peace and post-conflict strategies, including among others rural development, educational, religious and migration policies
– Exchanging information on programs and practices aiming to develop multicultural perspectives through policy planning, education, scholarship, media, publishing and other sectors from local to global community levels
– Suggesting channels and methods for global networking and information exchange to contribute to promoting pluralism and combating violent extremism.

The session was opened with the Message of H.E. Mr. Iyad Ameen Madani, Secretary General, Organisation of Islamic Cooperation (OIC) which was read by IRCICA Director General Dr. Halit Eren. The Secretary General emphasized that violent extremism, sectarianism and terrorism cannot be tackled with security or military means alone. Focus is therefore needed on the political, economic and social conditions conducive to these phenomena such as economic deprivation, political and social exclusion, discrimination, among others. Also highly important is the respect for human rights. For these reasons, formulation of a new paradigm for inter-religious, inter-sectarian tolerance and promotion of understanding and moderation through dialogue, is high in the OIC agenda.

Then, Assoc. Prof. Dr. Halit Eren, Director General of IRCICA, emphasized the need to institute a culture of multiperspectivity by means of policies in pertinent areas such as religious studies, history, sociology and international relations. A new understanding has to be introduced in the action towards countering violent extremism which would reach beyond mutual respect among groups, to seek multiperspectivity and pluralism. In this regard he recorded the benefits drawn from IRCICA’s programs of research and training on cultural and architectural heritage of specific cultures and civilizations which enhance multicultural interests and intercultural skills of participants from all cultures of the world.

Mr. Doudou Diene, United Nations Special Rapporteur on Contemporary Forms of Racism, Racial Discrimination, Xenophobia, and Related Intolerance, Paris, pointed to essential questions and evolving issues in the global debate related to multiculturalism and addressed practical implications of the development of the discourse. Mr. Diene underlined the need to deconstruct the concept of multiculturalism intellectually, in order to promote it soundly. He referred to the transformation undergone by identities of communities as a result of which no nation can be defined on the basis of a single identity. As main vectors of such transformation he dwelt upon the effects of migrations, globalization, and structural transformation of populations. He underlined the need to adjust interreligious and intercultural dialogue taking these changes into consideration.
Amb. Gunay Afandiyeva, President of the Turkic Culture and Heritage Foundation, Baku, highlighted common cultural elements and heritage assets of the Turkic world that her association promotes towards reinforcing cultural bridges between countries while reflecting their diversities.
Prof. Mohammed Abu-Nimer, Senior Advisor to Secretary General, King Abdullah Bin Abdulaziz International Centre for Interreligious and Intercultural Dialogue (KAICIID), Vienna, pointed out existing misconceptions about Islam’s understanding of such concepts as identity or diversity. He presented as case study the programs run by his institution to assess and evaluate the aims and curricula of Muslims’ schools in various countries with respect to conduciveness to radicalism, extremism or separatism.
Prof. Dr. Darkhan Kydyrali, President of the International Turkic Academy, Astana, referred with many examples and quotes, to the concept of multiperspectivity as reflected in scientific, scholarly, intellectual and literary works of the past and the present. He emphasized the power of these works in promoting inclusiveness and solving today’s related key problems. He underlined the important role of scientific and scholarly communities in promoting multiperspectivity and pluralism.

Principal contributions of IRCICA’s session to the discussion and cooperation promoted by the UNAOC around the objective of countering violent extremism were:
– an emphasis on “Pluralism” as an active stance that reaches further beyond tolerance and mutual respect and upholds multiculturalism and diversity
– pointing to the need to re-understand the concept of multiculturalism in the light of identity crises and transformations in today’s societies
– emphasis on the role of scientific and scholarly communities in promoting multiculturalism
– benefits of vocational training aiming to enhance inter-cultural operation and communication skills of professionals from all sectors
– pertinence of introspective studies by the various faith and cultural communities aiming to assess any existing trends or potential factors indicative of or conducive to negative processes such as radicalization and extremism.

IRCICA will continue to collaborate with the UNAOC around its objectives that are common to its own. It can be remembered on this occasion that IRCICA had actively participated in the Alliance’s Second Global Forum (Istanbul, 2009) where IRCICA, Council of Europe and North-South Centre of Council of Europe presented one of their joint projects, namely the three-year project titled "A history of interactions within and around the Mediterranean and with other cultures". In the Third Forum (Rio de Janeiro, 2010) IRCICA co-organized, jointly with international cultural institutions, a Thematic Session titled "History as a Tool for Cultural Cooperation" where it made one of the seven presentations. IRCICA also actively participated in the Fourth Global Forum of the UNAOC (Doha, 2011) where it co-organized a Thematic Session on History Education jointly with European institutions and presented a paper. During the same forum it also organized a side session highlighting the importance of Rihla – Travel Literature for cultural dialogue, jointly with ISESCO. The Centre also organized a session during the Sixth Global Forum of the UNAOC (Bali, 2014), titled “Coexistence of Different Cultures: Examples from History as Lessons for the Future”.