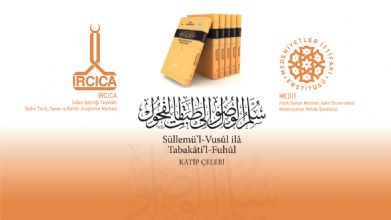 Sullam al-wusul ila tabakat al-fuhul (The ladder of elevation to the lives of the great and famous by generation) is one the most important works of the 17th century scholar Katib Chelebi (Mustafa bin Abdallah Katib Chelebi, 1609, Istanbul – 1658, Istanbul). An edition of this book was published by IRCICA in 2010, under the editorship of Prof. Ekmeleddin İhsanoğlu (Secretary General of the OIC).

Katib Chelebi’s most well-known works are:

– Kashf al-Zunnun ‘an asami al-kutub wa al-funun (The removal of doubt from the names of books and the sciences), a bibliographic encyclopedia, written in Arabic, which lists more than 14,500 books in alphabetic order; this work served as basis for Bibliothéque Orientale ou dictionnaire universel contenant tout ce qui regarde la connoissance des peuples de l’Orient of the French orientalist Barthélemy d’Herbelot de Molainville (1625-1695), completed in 1697 by Antoine Galland, which contains a variety of information on Eastern peoples

– Fezleke el-tavarih (1639), a general Islamic history and dynastic chronology up to 1639, in Turkish, and

The first cited, an outstanding bibliography in history of science, and the last cited, were published many times. Sullam al-wusul was not published until the IRCICA edition and Fezleke is not published either. Katib Chelebi is the first Ottoman scholar to study European books and compare them with Eastern ones. He translated some important European works of 16th century from Latin texts in cooperation with a French convert to Islam known as Sheikh Mehmed Ihlasi: Rawnak al-sultana, Tarih-i Firengi, among others and his study and partial translation of the Atlas Minor by Gerardus Mercator and Jodocus Hondius. Another characteristic of Katib Chelebi is that he was one of the pioneers of the objective approach in scholarship and set an example with his care in indicating his documentary sources.

The edition of Sullam al-wusul is arranged in two editions of 6 volumes each. The main body is in Arabic in both editions, whereby the introductory parts (comprehensive Introduction by Prof. Ekmeleddin İhsanoğlu and Preface by Dr. Halit Eren) are provided also in English in one of the editions and also in Turkish in the other edition. The sixth volume altogether is the Index. Work towards this publication was conducted at the initiative and under the editorship and coordination of Prof. İhsanoğlu, its period coinciding with the 400th birth anniversary of Katib Chelebi which UNESCO had included in its list of the anniversaries to be celebrated in 2009.

Sullam al-wusul is the most voluminous work written in the Ottoman period on the subject of general Islamic biography. It records the lives and works of important statesmen and scholars in Islamic history and also of renowned personalities from the pre-Islamic period who held a place in Islamic literature. The entries are arranged in alphabetic order. In the subsequent part of the book, Katib Chelebi gives information about the personalities’ names derived from their places of origin/genealogy, their identities, pennames, geographical regions and religious orders. In the prologue, the author explains the method he followed in writing the book, comments on the science of history and adds information on names derived from places of origin/genealogy. Supplementary information about the contents of the book is given in the epilogue. In this regard, this work is not only a book of biography but also a book of genealogy.

In the Introduction of the edition İhsanoğlu explores some features of Islamic literature in the area of biography as observed over the centuries. Historians of the Muslim world wrote hundreds of books in every branch of biography: "While some of these contained the biographies of scholars belonging to specific branches of science or to certain sects, others dealt with the life stories of statesmen, scholars and religious authorities who lived in specific places or specific periods of time. These kinds of biographies were usually arranged by category and by date. … Another type of biographies contained information on important statesmen, scholars, religious figures, authors, artists, etc. having lived in history. … This type of general biography was usually arranged alphabetically. … Katib Chelebi is the leading, or one of the leading scholars who produced general biographies." In preparing the edition, Katib Chelebi’s draft copy in the Süleymaniye Library and the copy of the first volume made by the author himself preserved at the Dar ul-kutub, Cairo (the national library of Egypt) were obtained. A well-known specialist of the field, researcher Mr. Mahmud Arnaut, started working on the project in 1998. By comparing the manuscripts and establishing the differences, he produced the basic text of the book. The latter reached its final form after a laborious collaborative work that involved comparisons, filling of gaps by referring to other sources, Fezleke in the first place, and addition of bibliographic notes. At this stage IRCICA staff members Dr. Salih Sadawi and Mr. Selahaddin Uygur exerted themselves in fulfilling these required steps and the Index was prepared by Mr. Uygur.

A meeting and book launch was organized about Sullam al-wusul jointly by IRCICA and the Center for Research on the Alliance of Civilizations (MEDIT) of Fatih Sultan Mehmet Waqf University in Istanbul, on 17 May 2012. The speakers at the meeting were Prof. Dr. Musa Duman, Rector of the University; Prof. Dr. Bekir Karlığa, Member of the University’s Baord of Trustees and Chairman of the Turkish National Coordination Committee for the Alliance of Civilizations; Dr. Halit Eren, IRCICA Director General; Prof. Dr. Ramazan Şeşen, Professor of Islamic history and Head of the Department of Bibliographies and Manuscripts; Prof. Ayman Fuad Sayyid, expert and consultant for manuscripts, Al-Azhar University, Cairo, and Prof. Ekmeleddin İhsanoğlu, Secretary General of the OIC and supervisor of the edition published by IRCICA.

The speeches highlighted the distinguishing features of Katib Chelebi and his works from various viewpoints. Prof. Musa Duman underlined the importance of scholarly efforts such as that embodied in this edition. He expressed his pleasure that Fatih Sultan Mehmet Waqf University was hosting this meeting highlighting the work of the illustrious figure of Islamic history of science Katib Chelebi. He also gave information on the University, which although is only two years old, has taken its place among the foyers of higher learning in Turkey.

Prof. Bekir Karlıağa underlined the special place of Katib Chelebi in intellectual history. He briefed the audience on several other attempts and projects aiming to publish editions of other works of Katib Chelebi.

Dr. Eren briefed the audience on IRCICA’s research and publication projects in the field of history of science. He outlined the process of preparation of the edition of Sullam al-wusul and thanked those who contributed in its different stages: Dr. Mahmoud Arnaut from Damascus, and members of IRCICA staff.

Prof. Ramazan Şeşen briefed the audience on each and every work of Katib Chelebi also indicating their locations and those of their copies if any. "In his short life of 49 years Katib Chelebi produced a number of works in the fields of bibliographic studies, history, geography, politics and accounting, among others. He knew Turkish, Arabic and Persian; he authored in the first two. He also had a reading knowledge of Latin and Greek. … He took interest in the scientific achievements of Europe, especially those in the field of geography, and tried to bring them to the attention of intellectuals and statesmen." Prof. Şeşen described in detail the work Sullam al-wusul and the methodology followed by IRCICA in preparing the edition. As to Prof. Ayman Fuad Sayyid, he analyzed the particular features of Sullam al-wusul from the viewpoint of the author’s approach, research and editorial methodology, pointing to authentic aspects of the work.

A comprehensive presentation was made by the supervisor of the edition, Prof. Ekmeleddin İhsanoğlu, tracing the process of Katib Chelebi’s preparing this voluminous work, the methods he followed in indicating his sources, referring the reader to another book of his or others, leaving blanks where he was planning to fill in further information, and many other cases in all of which his systematically adopted practices indicate his precision and punctiliousness. Prof. İhsanoğlu also explained the system and methodology adopted in preparing the edition by showing slide projections of various pages from the manuscript. In an especially important part of his presentation he communicated some observations resulting from a comparison of the author’s draft located at Süleymaniye Library in Istanbul and the incomplete copy located at Dar ul-Kutub in Cairo: this comparison gives clues with regard to the stages and processes of production of the work by Katib Chelebi.