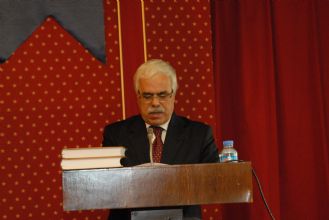 Our Advisory Board meeting today and tomorrow will involve presentations from the architectural faculties and experts who are collaborating in this work. Our meeting comes within a one-week program that has been running since the beginning of this week which comprised a studio and visits to some institutions important for the subject including the historical documentary archives and some architectural faculties in Istanbul. Meanwhile I believe some of you from outside Istanbul have already seen our Centre’s premises and its surroundings in the Yıldız Palace. We will be pleased to brief you on our Centre’s activities in other areas as well during these couple of days.

In its capacity as the research centre of the fifty-seven-member Organisation of the Islamic Conference, our Centre aims to promote international collaboration of organisations, universities and professionals for the study, preservation, revival and reuse of architectural and written cultural heritage and develop multicultural understanding around the common and diverse aspects of world cultures. Al-Quds 2015 was established in this spirit. The sui generis initiative realized through this program is well reflected in its definition, conduct, and presentation to concerned policy-makers, public opinion as well as academia. This initiative is a purely multidisciplinary scientific and technical one but the first to engage world-wide expertise and collaboration focusing on Al-Quds/Jerusalem city conditions, preservation of its heritage and improvement of its urban quarters. I believe it progressed remarkably well since it was given the start. It included seminars, publishing of reports, and the praiseworthy field missions. One of the special features of this program is the international support network of universities worldwide through which it is conducted. We have agreements with universities in OIC member countries, in Europe, America and in Turkey. This is a crucial aspect of the initiative.

It was in 2005, immediately after completing the annual workshops on the architectural heritage of Bosnia and Herzegovina, from 1994 to 2004, that we developed the concept of Al-Quds/Jerusalem 2015. We convened a meeting of experts, in February 2006 at IRCICA, which adopted a calendar and guidelines for the program. A first seminar was held at IRCICA in November 2006, with the participation of experts from Al-Quds itself, Europe and Turkey. Later, a study mission was implemented to the historic city, early June 2007. A comprehensive report was issued at the end of the visit, detailing the conditions of the city and the buildings, and proposing architectural and academic activities designed to help preservation efforts. This was followed by a first academic workshop in Al-Quds itself, held from 18 to 27 January 2008 with the participation of thirty-four architects and their assistants from Istanbul Technical University, Yıldız Technical University, Politecnico di Bari, Temple University of Philadelphia, the University of Sarajevo. Groups of participants focused on separate projects, dealing with the major sites and monuments. Lectures were given by local experts. Subsequently, an academic workshop was held at IRCICA, on 12-13 June 2008. Specialists from universities of Europe and Turkey, Al-Quds University, and the International Peace and Cooperation Centre of Palestine participated in the workshop. All through these field missions and seminars, the subject matter, contents and materials of the program gained body and consistency. Then in 2009, the meetings and researches recapitulated the experiences of the program, evaluated the work in progress and formulated new guidelines. The participants discussed the possibility of technical assistance to the authorities concerned in order to extend the Museum of Al-Aqsa Mosque. The idea of developing a virtual component of Al-Aqsa Museum, a project that could be undertaken by IRCICA in cooperation with the Museum authorities, was formulated.

Concerning Al-Quds, and Palestine in general, we also have several other activities that highlight the written and arts heritage as well as the urban heritage. For example we are developing a research project on the Ottoman official documents contained in the Ottoman archives in Istanbul in order to compile a documentation on the history of Al-Quds in the past centuries. The Yıldız photograph albums that are part of IRCICA photograph archives constitute another reference base. We published an album containing 470 historical photographs of Al-Quds selected from our own and other archives. Last June we organised a history congress on "Al-Quds during the Ottoman Era". Furthermore, a book on the waqfs in Al-Quds authored by Mohammed Ghosheh has been published by IRCICA. All these activities are given special attention and importance by IRCICA and its related circles.

In our present meeting we will have the opportunity to carry on with these proposals, discuss what we wish to do and what can be done in this program. Before concluding my words I would like to express my thanks and appreciation to the distinguished guests for their presence. For their valuable contributions to the organisation of this meeting I wish to convey my gratitude to the Municipality of Greater Istanbul whose continuous support of IRCICA activities is invaluable. I thank all our colleagues collaborating in this program for their participation. I wish you a fruitful and pleasant meeting.