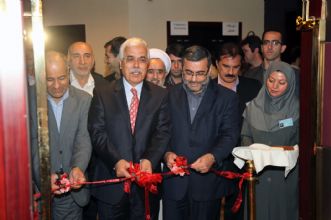 Tehran-Tabriz International Congress on: Features, Characteristics and Cultural and Economic Contribution of Arts and Handicrafts

The Research Center for Islamic History, Art and Culture (IRCICA), Istanbul and the Organisation for Culture and Islamic Relations, Islamic Republic of Iran, and the Universityof Islamic Arts in Tabriz jointly organised the "Tehran International Congress on the Features, Characteristics and Cultural and Economic Contribution of Arts and Handicrafts accompanied by an Exhibition of Albums, Catalogues and Books Published in the Field of Arts and Handicrafts".

The first three days of the event took place at Grand Azadi hotel in Tehran while the last two days took place at the University of Islamic Arts in Tabriz.  The event was rich and very successful in visits to artisans workshops, exhibitions, traditional music and etc.

The Exhibition of the Iranian Artisans was marvelous with master pieces of miniature, ceramic, carpets and kilims, glass works, leather works, book-bindings, textiles, jewelry and silver works, metal works, and many more. The artisans were showing their techniques as at work.

The congress aimed among others, to: explore the means that can be provided for an optimal use of this sector of activity in the cultural and tourism areas and that can generate benefits for the tourism sector when it is linked with arts, heritage and handicrafts, the latter was studied in its actual state and its development perspectives.

The congress underlined the need to preserve the authenticity of these traditional skills and to promote them by available means.  The congress discussed the following topics:

The social, economic and tourism aspects;

The marketing of the arts and handicrafts products;

The heritage aspect and efforts to preserve the authenticity and traditions;

The role of the government and efforts of the private sector;

The media and the duty of creating awareness about the importance of the sector and its constructive contribution to society.

Papers in discussing the above topics also treated in deep research the following Craft subtitles:

HE. Dr. Seyyed Mohammad Hosseini, stated that the historic traces remained today are the exact witness of the authenticity of the arts in Iran such as architecture and paintings during agers.  He added that the calligraphy plates, tiles, and miniatures remained in Iran show the qualitative level of the Islamic arts in the country.  He added that Islamic arts are ingrained with the pure nature of the human and the art of Muslims invite the world to the affability and benevolence and is the witness of God’s power with the absolute meaning because of the dignified nature and ideology.

Dr. Halit Eren, DG, IRCICA in his address extended his appreciation to the host country Islamic Republic of Iran for hosting this event and he praised the efforts of the Islamic Culture and Relations Organization and Tabriz Islamic Arts University for ensuring the successful organization of the Tehran-Tabriz International Congress.  He pointed out that IRCICA’s commitment to the organisation of the present congress comes within the framework of its Craft Development Program in which crafts and arts are considered one of the important developing sectors in our countries.  He added that this is why IRCICA undertook a comprehensive program to encourage their preservation and development.  Furthermore, he pointed out that the program is conducted in collaboration with the concerned authorities and institutions of the Member States, as well as regional and international organizations.  He added that IRCICA was also able to establish a documentary data base with the material collected which includes information about various types of handicrafts, among them issues relating to design, marketing, size of the tourism market, exchange of technology, training opportunities, availability of raw materials, among others.

Dr. Mohammad Bagher Khorramshad, President of the Islamic Culture and Relations Organization stated in his address that Islam nations today have such infections having impact on the cultural heritage and this threat is composed of stimulation leads to destruction.

Pointing the relation between the arts and Islam as a religion, he said in this section of this conference that Islam is a dual religion; means that has an equal value for this world and the after life and because Islam knows human and the universe purposive; the Islamic arts are such holy and purposive arts. He also called for holding the permanent exhibitions and galleries of Islamic artists in the Muslim countries establishing the alliance of the Islamist artists, and preparing the encyclopedia of Islamic nations’ arts in different languages.  He added: as the Islamic arts are such elegant and inspirational art; handicrafts have the same values.  Although all the Muslim countries posses handicrafts industry, the Islamic republic of Iran in some cases owns pure and various handicraft products. He mentioned also that Iran is hosting this congress on arts and Crafts for the second time after the Isfahan one held in 2002.