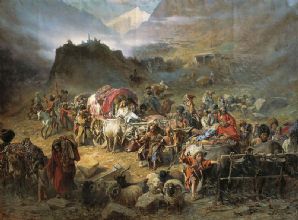 IRCICA, the Center for Balkan and Black Sea Studies (BALKAR) of Yıldız Technical University, Istanbul, and the Department of Political Science and International Relations of the same university jointly organised a conference on “The 1864 Caucasian Migration: War and Exile”. It was held on 6-7 December 2010 at Yıldız Technical University Auditorium.

Following the opening, introductory speeches were given on “Position of the Caucasian Migration in Research and Public Opinion” Assoc. Prof. Mehmet Hacısalihoğlu (BALKAR Director), “The Historiography on the 1864 Caucasian Migration” by Prof. Fikret Adanır and “Problems of Sources and Methodology in Research on the 1864 Caucasian Migration” by Prof. Nedim İpek. The sessions themes were: Migration Process and Epidemics, Resettlement of the Emigrees in Anatolia, Resettlement of the Emigrees in the Balkans and in the Arab Provinces, Integration Processes and Problems, and Cuırrent Situation. Twenty-six research papers were presented by participants from Turkey and abroad including Bulgaria, Denmark, Germany, Kosovo, USA.

The successive Russo-Ottoman wars and the resulting expansion of Russian territories caused migrations of Muslim peoples in various parts of the Empire. One of the major migration movements and the largest to originate from Caucasia was the 1864 migration. It is one of the relatively least studied subjects of history. The numbers of migrants, the majority Circassians, reached millions. A large part of the migrants were resettled in different regions of the Ottoman Empire. The conference aimed at bringing together existing data and research about thes eprocesses, promoting exchange of information among researchers concerned and assessing the state of the studies.