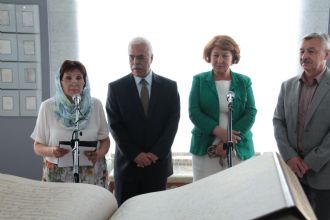 The Sixth International Bolgar Forum was held in Bolgar, Spassky District and in Kazan, Republic of Tatarstan, on 14-15 August 2014. In this sixth round the Forum was scheduled concomitantly with the Kazan 2014 Turkish World Cultural Capital program and given the theme “Historical and Cultural Heritage of the Turkic World”. Bolgar is a historical and archeological complex representing cultural and faith diversity. It was the land of the Volga Bolgars (7th-15th centuries) where Islam was officially adopted as state religion in the early tenth century. The complex, including its White Mosque, was re-opened for visits on the 1125th anniversary of the adoption of Islam by the Volga Bolgar State, on 12 June 2012.

The Sixth International Bolgar Forum was opened by H.E. Mr. Mintimer Shaimiev, State Advisor and Chairman of the Board of Trustees of the National Fund “Revival”, Tatarstan. Mr. Shaimiev informed the audience of the cultural activities and archeological works carried out in Bolgar in order to highlight the significance of the site as a symbol of inter-cultural and inter-faith interactions. He mentioned in this respect the museum that was opened in Bolgar. Mr. Shaimiev expressed his pleasure that Bolgar was included in UNESCO’s World Heritage List.

Then, IRCICA Director General, who was invited to address the opening, said that having reached the sixth round with increased participation of scholars from different countries, the Bolgar Forum is one of the most eminent platforms for Turkic studies. He expressed his congratulations to all concerned, on Bolgar’s inclusion in UNESCO’s World Heritage List. Dr. Eren spoke of IRCICA’s activities in the area of history research and heritage preservation. He said that IRCICA’s activities realized in cooperation with governmental authorities and academic institutions of Tatarstan and of the Russian Federation including five congresses and several publications have highlighted the importance of the region in general and Kazan and Bolgar in particular with respect to international cultural history.

The opening was then addressed by Minister of Culture of Tatarstan Mr. Sibagatullin Airat Minnemullovich; the Head of Spassky municipal region Mr. Kamil Nutaev; the President of the Tatarstan Academy of Sciences Prof. Myakzum Salakhov, and other dignitaries.

The Forum’s second day sessions continued in Kazan. During the period of his participation in the Forum, IRCICA Director General Dr. Halit Eren attended a function at the Reserve Museum of Kul Sharif Mosque in Kazan Kremlin which was organized on the occasion of his offering a copy of one of IRCICA’s most valuable publications: the technical study and reproduction (facsimile edition) of the Quran copy which is attributed to the time of Caliph Othman bin Affan and kept at Topkapı Palace Museum in Istanbul. An official function was held where Dr. Eren handed over the book to Ms. Zilya Valeeva, Director of Kazan Kremlin; the two parties signed the related registry.