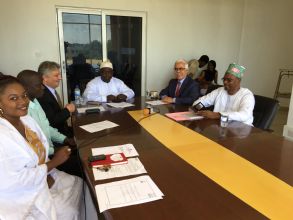 Preparations are launched for joint cultural activities to be organized by the Government of The Gambia and IRCICA in 2016. Steps were taken in this direction during IRCICA Director General Dr. Halit Eren’s visit to The Gambia on 14-16 October 2015.
The meeting with H.E. Mr. Benjamin Roberts, Minister of Culture and Tourism of The Gambia, focused on the project to hold a "Banjul International Festival of Arts, Crafts and Creativity" in 2016. The idea of this event was formulated during the period of the Eighth Session of the Islamic Conference of Tourism Ministries (ISTM) which was held in Banjul, on 4-6 December 2013 and developed since then to be concretized as a composite event involving an award competition, exhibitions and a congress.
During the meeting with the Minister of Higher Education, Research, Science and Technology, Dr. Aboubacar Abdullah Senghore, a cooperation protocol was signed, determining the concept and modalities of an International Symposium on “History of Islamic Civilization in West Africa”. The symposium, scheduled for 27-28 July 2016, will bring together specialists from around the world.
During the period of his visit to The Gambia, Dr. Eren paid a courtesy visit to Ambassador Dr. Omar Jah, an eminent diplomat and scholar in Islamic studies who was his country’s ambassador to Middle Eastern countries from 1982 on and represented his country in the Governing Board of IRCICA from 1990 to 2002 chairing the Board in the latter part of his term.

Director General Dr. Eren also paid a visit to the Ambassador of the Republic of Turkey in Banjul, Mr.  Ergin Soner

Proceedings of conferences on history and culture in...

Visit of a delegation from Pakistan to IRCICA...

IRCICA Participated in the 14th General Meeting on...