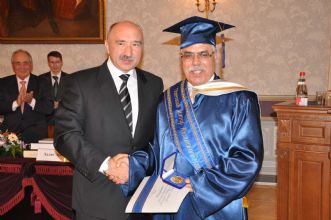 Launching of the book Tatar History and Civilisation

The book titled Tatar History and Civilisation resulted from a joint project of the Tatarstan Academy of Sciences of Tatarstan and IRCICA, and was published by the latter in Istanbul earlier this year. It is the first large-scale work on Tatars and Tatarstan to be published in English.

A book launching was conducted in the Tatar capital Kazan on 20 October 2010 under the chairmanship of the State Adviser and former President of Tatarstan Mr. Mintimer Shaimiev. Among those present were the Vice Premier and Minister of Culture of Tatarstan Ms. Zilya Valeyeva, OIC Secretary General Prof. Ekmeleddin İhsanoğlu, the Ambassador of Turkey in Moscow Mr. Aydın Sezgin, the Consul General of Turkey in Kazan Mr. Ahmet Ergin, and a number of faculty, historians and guests.

H.E. Mr. Shaimiev pointed out that this publication was an expression of the process of Tatar people’s assuming their history and assimilating their authentic identity. Mr. Shaimiev expressed the hope that publication of the book in the English language will contribute in making known Tatar history and ethnos on the eve of the World University Games to be hosted by Kazan in 2013 (for more information and outlines of the addresses: www.ksu.ru).

While presenting the book, Shaimiev paid tribute to the outstanding historian, turkologist, prominent public figure, professor of Kazan University Mirkasim Usmanov who died on 11 October 2010 emphasizing his life-long scholarly achievements and his special role in the project. The participants and guests observed a moment of silence. The late Prof. Mirkasim Usmanov was one of the founders, and Vice-President, of the Academy of Sciences of Tatarstan. Earlier he was the First Vice-Rector and acting Rector of Kazan State University. His work enriched significantly both the source base and the study of the history, literature and culture of the Tatar people over the period between 13th to early 20th centuries. He was the supervisor and the chief editor of the seven-volume fundamental edition History of Tatars Since Ancient Times, and co-editor of the launched book. As an expression of his contributions to scholarhip in history, IRCICA had presented the “IRCICA Award for Excellence in Research” to Prof. Usmanov in 2008.

The book Tatar History and Civilization is the outcome of a long-term research activity of scholars of the Institutes of History (Institute of History named after Shihabuddin Marjani), Language, Literature and Art, and Encyclopedia, of the Academy of Sciences of Tatarstan, under the joint supervision of Pofessor Mirkasim Usmanov and the Director of the Institute of History of the Academy of Sciences Prof. Rafael Khakimov.

OIC Secretary General Prof. İhsanoğlu, who was the initator of the project of this book while he was Director General of IRCICA before 2005, said that the book provides most comprehensive insight into various aspects which have never been studied before. Prof. Rafael Khakimov, Director of Institute of History of the Academy of Sciences of Tatarstan extended words of gratitude to Mr. Ekmeleddin Ihsanoglu, “Though we always possessed rich material, the world community expected a different approach. In this book we tried to estimate the contribution of Tatar civilization to global culture, to determine the place and role of Tatars in the Islamic world”.

Dr. Halit Eren, Director General of IRCICA, reviewed the preparation process of the book authored by thirteen Tatar scholars. He said that everything was translated from Russian and Tatar languages into English. He said that scholars of Kazan and IRCICA had cooperated in the best possible way and that the Centre was interested in further development of joint activities.

Earlier on that day, the Secretary General of the OIC and the Director General of IRCICA together with State Adviser and former President of Tatarstan H.E. Mintimer Shaimiev, visited the historical sites in the city of Bolgar at the outskirts of Kazan, where Islam was accepted as the state religion in 922. Restorations and excavations are conducted in the sites, including restorations of the palace of the Bolgar Khanate and ancient mosques.