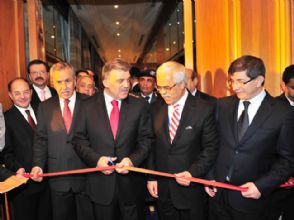 On the occasion of the state visit of H.E. Abdullah Gül, President of the Republic of Turkey, to the Republic of Yemen, IRCICA held an exhibition of historical photographs selected from its own archives and referring to the theme of “Friendship Between Turkey and Yemen Throughout History”. The exhibition was opened by President Gül on 10 January 2011 in Sana’a, within the program of his visit.

The exhibition, held at Mövenpick Hotel, Sana’a, comprised the reproductions of 54 photographs selected from the “Albums of Sultan Abdulhamid II” which constitute the basis of the archives of IRCICA. A catalogue containing 122 photographs was published on the occasion. It pictures shared memories of the peoples of Turkey and Yemen.

During the meetings between the President of Yemen H.E. Ali Abdullah Saleh and President Gül involving the delegations in their entourage, President Gül, accompanied by Dr. Halit Eren, IRCICA Director General, presented President Saleh with the large-size catalogue of the exhibition. This was an occasion to jointly recall the Congress on “Yemen during the Ottoman Period” which was organized by IRCICA and the National Archives of Yemen under President Saleh’s patronage in December 2009 and the meeting that was accorded to Dr. Eren at the Presidency office.

The Prime Minister of Yemen Mr. Ali Muhammed Mujur visited the exhibition after the Turkish-Yemeni Bussiness Forum; Dr. Eren presented a copy of the catalogue to the Prime Minister.

The catalogue published by IRCICA is a valuable addition to the series of albums it publishes in order to render this documentary treasure accessible to all, such as the albums on Istanbul, Erzurum, Bursa in Turkey, Egypt, and Japan published earlier. It holds exhibitions on various occasions: from 1980 to 2011 IRCICA organized 231 exhibitions of historical documents, manuscript works and rare books, architectural projects and designs, works of fine arts and handicrafts as well as photographs. Some of these were displayed in its own halls at Yıldız Palace, Istanbul and others in various countries including Algeria, Egypt, France, Germany, Guinea, Indonesia, Japan, Jordan, Kuwait, Malaysia, Morocco, Oman, Pakistan, Qatar, Senegal, Sudan, Syria, Tunisia, UK, USA, UAE and Yemen.