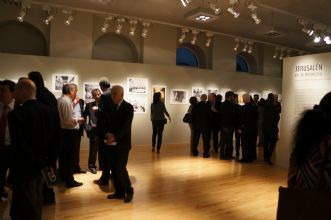 “Jerusalem in the Memory” photograph exhibition in Madrid, Spain 4 May 2015

An exhibition titled "Jerusalem in the Memory" prepared by IRCICA was organized in Madrid jointly with Casa Arabe, the Embassy of the Republic of Turkey, and the Embassy of the State of Palestine. The exhibition offered views of Jerusalem during the late 19th-early 20th centuries in photographs selected from the albums of Ottoman Sultan Abdulhamid II and IRCICA’s archives at Yıldız Palace, Istanbul. Informative texts published in the exhibition’s brochure were extracted from the album Al-Quds in Historical Photographs (IRCICA, 2009). The pictures dating from the late Ottoman period evoked the shared memory of an era of tolerance where the existence and heritage of each faith was respected and preserved.

A panel conference marked the opening of the exhibition, during which IRCICA Director General Dr. Halit Eren briefed the audience on the contents of the exhibition and also spoke of the present state of the cultural and architectural heritage in al-Quds/Jerusalem. He outlined the efforts made by IRCICA for the preservation of the Islamic historical which constitute the cultural dimension of the OIC’s overall efforts in support of the cause of al-Quds and Palestine. During the same panel, the Ambassador of Turkey Mr. Ömer Önhon, the Ambassador of the State of Palestine Mr. Musa Odeh, Casa Arabe’s Director General Ambassador Eduardo Lopez Busquet addressed diverse aspects of the history and the present situation of al-Quds. The speakers underlined the importance of the exhibition and the panel in highlighting the multi-faith and multicultural history of al-Quds/Jerusalem.