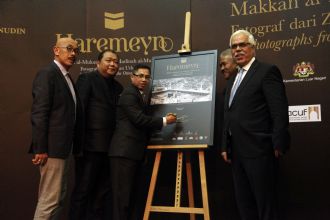 An exhibition titled "Haramein. Makkah al-Mukarramah and Madina al-Munawara during the Ottoman Period" prepared by IRCICA and organized under the auspices of the Malaysian Government was opened at the National Visual Art Gallery (NVAG), Kuala Lumpur, on 12 June 2015. The address of Malaysian Deputy Foreign Minister Dato Hamzah Zainuddin to the opening ceremony was read by Dato Ibrahim Abdullah, Secretary General of the Foreign Ministry. Assoc. Prof. Halit Eren, Director Genera of IRCICA and Dato Mahadzir Lokman, Chairman of NVAG addressed the opening ceremony. Were present Dato Mohamed Najib Dawa, IRCICA Governing Board’s member representing Malaysia, Mr. Haned bin Masjak, Director General of NVAG, and a large number of visitors from cultural and academic circles. In his address IRCICA’s Director General said that evoking the history of Makkah and Madina (the "Haramein", the two sacred territories) through these photographs represents a commitment to serve them, to increase the knowledge about them, their stages of development, the practices and rituals related to them, and other aspects of their history.

The photographs displayed were selected from different collections of IRCICA’s archive, mainly from the Yıldız Albums dating from the reign of Sultan Abdulhamid II (late 19th-early 20th centuries) and from the collection of Fahrettin Türkkan Pasha, who was the Commander of the Ottoman forces in Hejaz and Defender of Madina during World War I. They relate to a wide range of aspects of Makkah and Madina including infrastructural and construction activities, maintenance of sacred structures, public services, as well as sacred monuments and locations.

The exhibition will be open for visits for three months, after which it will travel to other cities of Malaysia.

An annotated album titled Haremeyn. Makka al-Mukarrama and al-Madina al-Munawwara in photographs from the Ottoman period selected from the albums of Sultan Abdulhamid II and the collection of Fahreddin Pasha (Türkkan) was published by IRCICA in 2014. An exhibition of photographs of the Haramein titled "The Two Holy Mosques Photograph Exhibition" organised with the coordination of the Ministry of Culture and Information of the Kingdom of Saudi Arabia was opened in 2010 in Jeddah.