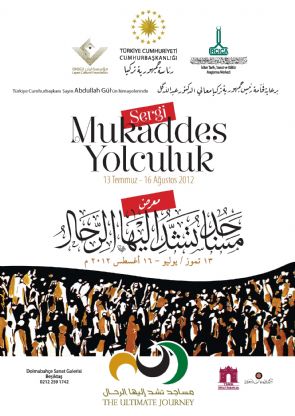 “The Ultimate Journey”: Exhibition of paintings and calligraphies on the Holy Ka’ba, Prophet Mohammed’s Mosque and al-Aqsa Mosque, July-August 2012 in Istanbul

An exhibition of oil paintings, miniature paintings and calligraphic works depicting the Holy Ka’ba in Mecca, Masjid al-Nabawi (the Mosque of the Prophet) in Medina, and Masjid al-Aqsa in Al-Quds selected from the personal collection of H.R.H. Prince Faisal bin Abdullah bin Mohammed Al Saud, Minister of National Education, and Chairman of the Board of Trustees of Layan Cultural Foundation, Kingdom of Saudi Arabia, drew the interest of cultural and artistic circles in Istanbul. The exhibition was on display from 13 July to 16 August 2012 coinciding in its largest part with Ramadan 1433.

Under the patronage of the President of the Republic of Turkey H.E. Abdullah Gül, it was arranged by IRCICA and Layan Cultural Foundation at Dolmabahçe Art Gallery in Beşiktaş, Istanbul. It was titled "The Ultimate Journey" drawing inspiration from the Hadith (saying of Prophet Mohammed pbuh) "Do not set out on a journey except for three Mosques, i.e. al-Masjid al-Haram, this mosque of mine (Masjid al-Nabawi) and al-Masjid al-Aqsa".

A high-profile ceremony marked the opening of the exhibition on 13 July with a large number of artists and art lovers attending. Following the welcoming words of IRCICA Director General Dr. Halit Eren, addresses were delivered by

Mr. Ömer Dinçer, Minister of National Education of Turkey, and