Home Activities History, Along With Books, at an Istanbul Library 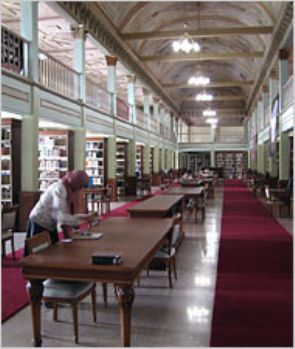 History, Along With Books, at an Istanbul Library

by Yigal Schleifer
*The New York Times, Globespotters: Travel News, From Those in the Know, 30 July 2009

Istanbul may be filled with bookshops, but public libraries are another matter. Most of the city’s libraries belong either to academic or private institutions and are, for the most part, off limits to the public.

This being the case, the opening of any new public library is a cause for celebration. But the new home of library of the Istanbul-based Research Centre for Islamic History, Art and Culture, or IRCICA (Yildiz Sarayi, Seyir Kosku, Barbaros Bulvari, Besiktas; 90-212-259-1742; www.ircica.org), is something special, located inside the historic and elegant armory of the Yildiz Palace, built in the late 19th century by Sultan Abdulhamid II.

Unused for decades, the armory and its beautiful frescoed ceilings "- which feature pictures of Ottoman warships and the Sultans’ coat of arms -" have been restored to their former glory, the vast space now home to the library’s 70,000 volumes, some of them rare editions, that are on open shelves and available to the public. (The palace complex, less visited than some of Istanbul’s other Ottoman monuments, is also home to the Municipal Museum of Istanbul and is a very nice place to walk around, with gardens and views of the Bosphorus.)

IRCICA is the Istanbul-based cultural arm of the Organization of the Islamic Conference (OIC), an inter-governmental organization with 57 member states and headquartered in Jeddah, Saudi Arabia. The library’s collection was created to support research into Islamic history and culture and the arts and sciences of Muslim nations.

Besides contemporary books and journals, the library has some interesting rare and early books, including the first translation of the Koran into Latin, circa 1550; some of the first books printed in Europe on the Muslim world; and what are known as the "Mutferrika prints," the first books to be printed in the Ottoman state, dating to 1727.

Open since May, the library still seems to be something of a secret. On a recent day, only a handful of people were there using it, among them Leizan Kux, an Istanbulite looking through its collection of books about the Koran.

"It’s difficult to find a library that’s open to the public in Istanbul," she said. "For me, this place is heaven on earth."

IRCICA is open Monday to Saturday, 9 a.m. to 6 p.m. Admission is free.