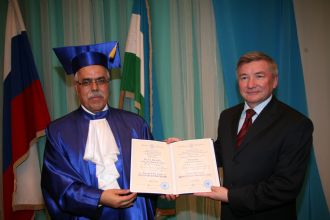 Bashkir State University in Ufa, Bashkortostan (Russian Federation) has conferred upon Dr. Halit Eren, Director General of IRCICA, the title of Honorary Professorship. The title was presented by decision of the Academic Council of the University in recognition of his contributions to the promotion of research and studies on the history of Volga-Ural region.

The Honorary Professorship certificate was presented to Dr. Eren by the Rector of Bashkir State University Prof. Ahad Mustafin on 22 October 2010 during the closing ceremony of the International Congress on Islamic Civilisation in Volga-Ural Region which was organized by IRCICA jointly with the Ministry of Education and Science of the Russian Federation, the Government of Bashkortostan, and Bashkir State University, in Ufa.