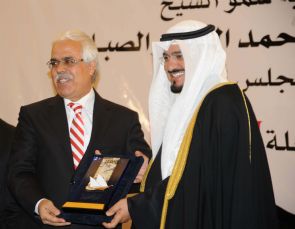 IRCICA SELECTED “INSTITUTION OF THE YEAR”

Research Centre for Islamic History, Art and Culture (IRCICA) was selected as worthy of the Institution of the Year award by al-Arabi journal published by the Ministry of Information of the State of Kuwait. Kuwaiti Minister of Petroleum and Information Sheikh Ahmad al-Abdullah al-Ahmad al-Sabah attended the award ceremony that was arranged at the inauguration of the conference “The Arabs are heading Towards the East” and thanked IRCICA for carrying on valuable studies. The conference was organized under the patronage of the Kuwaiti Prime Minister Sheikh Nasser al-Muhammed al-Ahmed al-Jaber al-Sabah.

Minister al-Sabah continued to say that the conference was realized on the 50th anniversary of the independence of the State of Kuwait and expressed that the historic ties between Kuwait and Asia were not left in the past but were renewed with every passing day; he stressed that the Arabic world was a part of Asia and establishing strong ties between the Middle East and Asia was vital. During the award ceremony organized within the coverage of the conference, IRCICA received the Institution of the Year award for its contribution to the development of relations between Asia and the Arab world and for its studies and publications in the area of Islamic culture and civilization. Director General Dr. Halit Eren received IRCICA’s award from Kuwaiti Minister of Petroleum and Information Sheikh Ahmad al-Abdullah al-Ahmad al-Sabah.

In turn IRCICA Director General Dr. Halit Eren congratulated al-Arabi journal who made great contributions to the Arabic world and the Islamic geography for more than fifty years, and said that they were following with admiration al-Arabi’s efforts to unite the Islamic world and strengthen the ties of friendship between the Muslims. Dr. Eren thanked the journal and its editor al-Askari who endeavored to establish tolerance and the spirit of dialogue between religions and civilizations. Dr. Eren said that as IRCICA they were elated to be found worthy of this award by al-Arabi and continued to explain IRCICA’s activities, projects and contributions to the Islamic world.