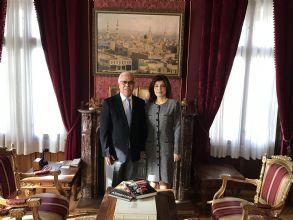 On 1st December 2016 the Director General of IRCICA Assoc. Prof. Halit Eren received Ambassador Gunay Afandiyeva, President of the International Turkic Culture and Heritage Foundation, Baku, Azerbaijan, at IRCICA’s headquarters at Yıldız Palace. Possible areas of cooperation between IRCICA and the Foundation were discussed in detail. IRCICA Director General informed Ambassador Afandiyeva on recent developments in the Centre’s activities, with an emphasis on those research projects, academic congresses and documentary exhibitions that are related to the arts and cultures of Turkic states. The Director General also guided Ambassador Afandiyeva to the library, the collections of calligraphic works and the display of IRCICA’s publications. Views were exchanged on prospective joint projects which would serve both organizations’ objectives, such as highlighting, preserving and making known the assets of cultural and architectural heritage of their respective member countries including the Azeri Turkic-Islamic heritage situated in the Karabagh region occupied by Armenia. Ambassador Afandiyeva offered to IRCICA books on various themes related to the Turkic world’s cultures and a book on the Khojaly Massacre of 1992.

The International Turkic Culture and Heritage Foundation was established in Baku at the decision of the Summit Conference of the Cooperation Council of Turkic Speaking States on its session held in Astana, Kazakhstan in September 2015 which also appointed Ambassador Gunay Afandiyeva as the first President of the Foundation