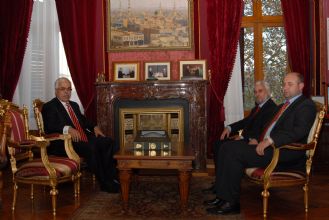 On 2 December 2009, Dr. Mustafa Hacı who was re-elected Chief Mufti of the Bulgarian Muslims and Mr. Şaban Ali who was elected Chairman of High Islamic Shura at the National Congress that convened on 31 October 2009 in Sofia, paid a visit to Dr Halit Eren, Director General of IRCICA.

They expressed their thanks and appreciation for IRCICA’s activities concerning the preservation of Islamic cultural heritage in Bulgaria and the scholarly works conducted on the subject of Islamic civilization in the Balkans.

The issue of Bulgarian Muslims was also brought up during the visit.