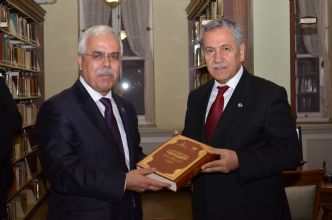 On 30 November IRCICA was honoured to receive on its premises Mr. Bülent Arınç, Deputy Prime Minister of Turkey. Mr. Arınç, accompanied by Mrs. Arınç, and his entourage were received by Director General Dr. Halit Eren at the entrance gate of Yıldız Palace. Dr. Eren first hosted them in his Office at the Directorate General where talks where exchanged on the Centre’s activities and cultural subjects in general. Then Dr. Eren guided Mr. Arınç to the Library of IRCICA at the Silahhane (Armoury) Building of Yıldız Palace and briefed him on the Centre’s publications showing samples, on one hand, and the characteristics of the library’s collections, qualitatively and in numbers, on the other.

Deputy Prime Minister Mr. Bülent Arınç showed a keen interest in and expressed his appreciation of the activities and the publications of the Centre.

One week before (23 November) Mr. Arınç had addressed the book launching of IRCICA’s publication titled Bursa in Photographs of the Period of Sultan Abdulhamid II for which a ceremony was held in Bursa itself.