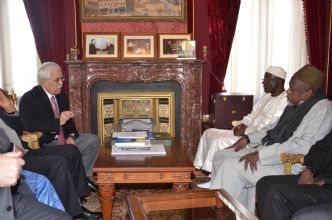 Dr. Yacouba Traoré, Minister of Religious Affairs and Faith of the Republic of Mali visited IRCICA

Dr. Yacouba Traoré, Minister of Religious Affairs and Faith of the Republic of Mali visited IRCICA on 8 March 2013 within the framework of his visit to Turkey as the official guest of the Turkish Prime Ministry. The meeting with Dr. Halit Eren, Director General, IRCICA, revolved around the existing relations between the governmental and cultural institutions of Mali on one hand and IRCICA on the other, and possible ways of realizing a more intensified cooperation that would lead to joint cultural and academic projects. Dr. Eren affirmed that IRCICA gives importance to studies on the history and cultural heritage of Mali, which is one of the centers of Islamic culture and civilization in Africa. He recalled in this regard the project to hold a congress on the theme of Islamic civilization in West Africa which IRCICA and the Government of Mali are envisaging jointly. After the talks, Dr. Eren guided the Minister and the accompanying delegation to the library and some of the research departments.

The Minister had started the Istanbul part of his visit to Turkey after completing his contacts in the capital Ankara, where he met with Deputy Prime Minister Bekir Bozdağ and Foreign Minister Ahmet Davutoğlu.