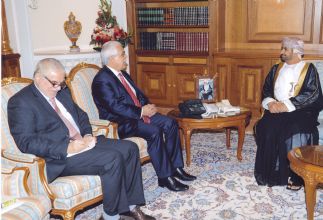 The Director General of IRCICA Dr. Halit Eren was received by Palace and Government authorities of the Sultanate of Oman during his visit to the capital city Muscat to attend the opening of the International Exhibition of Handicrafts and Traditional Arts which was organized by IRCICA in cooperation with the Municipality of Muscat from 3 February 2012 onwards within the framework of the Second Muscat International Festival on Arts and Handicrafts.

At the request of His Majesty Sultan Qaboos bin Said, H.E. Mr. Khaled bin Hillal Al Bousaidi, Minister of the Diwan of the Royal Court, received Dr. Eren in his office on 8 February. The meeting was an excellent occasion for appraising the ongoing cooperation between the Sultanate of Oman and IRCICA. Friendly conversations were exchanged besides the discussions on projects and on cultural and art themes which have been and can further be taken up in the context of this cooperation.

IRCICA Director General Dr. Eren was also received by the Minister of Awqaf and Religious Affairs of the Sultanate of Oman, H.E. Sheikh Abdullah bin Mohammed bin Abdullah al-Salmi. The talks covered in particular the Centre’s research and publishing activities in the field of Quranic studies. Views were exchanged on possible joint projects and exchanges of information in this field.

Then, the Minister of Foreign Affairs of the Sultanate of Oman H.E. Mr. Yusif bin Alawi bin Abdallah received Dr. Eren whereby the cooperation between Oman and IRCICA was reviewed with appreciation. Talks were held with the Minister and his delegation on projects to be considered for future joint activities. The latter include scholarly congresses, among them the conference to be organized in İstanbul in the fall of 2012 on the History of Oman on the basis of Archive Documents. Dr. Nazih Marouf, Head of the Craft Development Program at IRCICA, accompanied the Director General during the meeting.

Dr. Eren also met with Dr. Hamed bin Dawyani, Head of the National Archives of Oman. The meeting’s emphasis was on the conference on the History of Oman on the basis of Archive Documents to be organized in İstanbul in the fall of 2012.