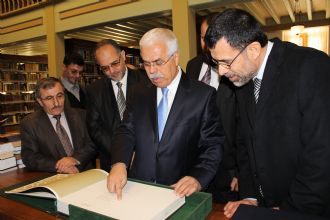 On 26 December 2013 IRCICA received Mr. Ali Mohamed Al-Bashir Hamouda, Minister of Awqaf and Islamic Affairs of Libya. The Minister was visiting Turkey officially. During his visit to IRCICA Mr. Hamouda and Dr. Halit Eren had a fruitful meeting reviewing existing and possible future cultural cooperation between IRCICA on one hand and various institutions of Libya on the other. Then, Dr. Eren guided the Minister to some departments of the Centre among them the library. Minister Hamouda expressed his appreciation of the activities and his wish for further exchanges and collaboration between IRCICA and the cultural institutions of Libya.