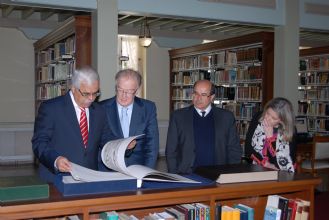 IRCICA was honoured to receive on its premises Mr. Jorge Sampaio, the High Representative of the UN Alliance of Civilisations (AoC), accompanied by Ms. Helena Barroco, Special Adviser, on 26 April, during the period of Mr. Sampaio’s official visit to Turkey. The meeting with Director General Dr. Halit Eren covered basically issues of cooperation and IRCICA’s contributing, through its various projects and programs, in international efforts towards realizing the AoC objectives. Developments recorded since Mr. Sampaio’s first visit to IRCICA on 27 June 2008 were reviewed, including the Centre’s activities in the context and the follow-up of the AoC’s Second Forum which was held in Istanbul in April 2009 and those forthcoming within the framework of the Third Forum, to be held in Rio, Brazil end of May.

Dr. Eren and IRCICA staff concerned attended the lecture delivered by Mr. Sampaio the same evening at the AoC’s Istanbul Office relating to the AoC objectives and activities.