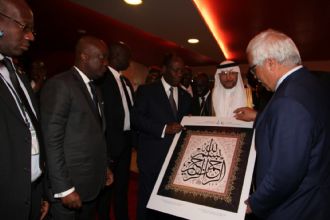 President of the Ivory Coast H.E. Alassane Ouattara received from Dr. Halit Eren a plate of calligraphy from IRCICA’s exhibition …

At the exhibition of Islamic Calligraphy which was organized by IRCICA during the 44th Session of the OIC Council of Foreign Ministers held in Abidjan, Ivory Coast (10-11 July 2017), IRCICA Director General Dr. Halit Eren presented H.E. Alassane Ouattara, President of the Ivory Coast, with a plate of calligraphy from the exhibition, as a souvenir of the event. The exhibition consisted of plates selected from among award-winning works at the ten international calligraphy competitions organized by IRCICA during 1986-2016.
President Ouattara expressed his appreciation of the Centre’s activities promoting the Islamic art of calligraphy