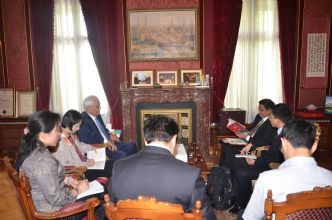 Professor Li Jie, Vice President of the Chinese Academy of Social Sciences (CASS), accompanied by a delegation of scholars from CASS, visited IRCICA on 27 May 2013. Following the talks held at Director General Dr. Halit Eren’s office, Prof. Li and his delegation were guided by Dr. Eren to the research departments and the library, where they saw the publications and other results of the activities. The congress on "China and the Muslim World: Cultural Encounters" which was organized by CASS and IRCICA on 28-29 June 2012 in Beijing, was recalled with satisfaction for its success as a first academic event on this theme. Professor Li was invited to Ankara the next day, on 28 May 2013, to deliver a lecture hosted by the International Strategic Research Organization (USAK). Major headings of the lecture touched upon political and economic developments and relations between Turkey and China.