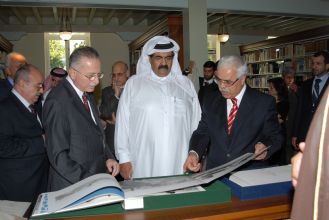 IRCICA was most honoured by the visit of His Highness Sheikh Hamad bin Khalıfa al-Thani, Emir of the State of Qatar, at its headquarters on 9 November 2009. His Highness the Emir was in Istanbul to participate in the Economic Summit of the COMCEC – OIC’s Standing Committee for Economic and Commercial Cooperation. The Qatari delegation comprised His Highness Hamad bin Jassim bin Jaber Al Thani, Prime Minister, and the Emir’s daughter and chief of staff Sheikha Hind bint Hamad Al Thani, and government officials. At the visit to the Centre, His Highness was accompanied by H.E. Prof. Ekmeleddin İhsanoğlu, Secretary General of the OIC.

His Highness and the other distingusihed guests were met at the entrance of the Palace by the Director General of IRCICA Dr. Halit Eren. They were led to the Library of IRCICA at Silahhane Building, where an exhibition of the various colelctions of the library arranged according to subject area, and samples of publications of IRCICA, was presented to His Highness the Emir. Dr. Eren recalled some of the publications and the projects and programs associated with them: in particular, the edition of the Mushaf (Quran copy) of Qatar which was produced after a competition coordinated jointly by IRCICA and the Ministry of Awqaf and Islamic Affairs of Qatar to select the calligrapher, and published by the Ministry under the technical supervision of the Centre. He also mentioned the facsimile editions, accompanied by scholarly studies, of Quran copies attributed to the time of Caliph Othman, among others. The Director General also briefed His Highness the Emir on the project titled «Al-Quds/Jerusalem 2015» being implemented by the Centre.

His Highenss the Emir of Qatar praised the work conducted by IRCICA and expressed his appreciation of the achievements.

His Highness the Emir also gave instructions to the Governing Board member representing Qatar, Dr. Abdulaziz Turki Subaie, who had been elected Chairman of the Governing Board at the Board’s working session the previous day, to find an appropriate formula for the distribution of the publications of IRCICA to universities within and outside the Muslim world.

The Governing Board of IRCICA at its closing session held later that day, issued a communique, to be submitted as a letter of gratitude to His Highness Sheikh Hamad bin Khalifa al-Thani, Emir of the State of Qatar, expressing its profound gratitude to His Highness and affirming that activities of IRCICA will continue with even greater intensity and efficiency with the encouragement given by this generous support extended to the Centre.