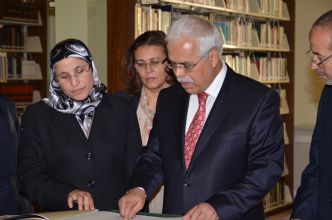 The Minister of Solidarity, Woman, Family and Social Development of the Kingdom of Morocco Mrs. Bassima Hakkaoui visited IRCICA

H.E. Mrs. Bassima Hakkaoui, Minister of Solidarity, Woman, Family and Social Development of the Kingdom of Morocco, visited IRCICA on 28 April 2012. The Director General of IRCICA Dr. Halit Eren welcomed the Minister in his office where he briefed her on the Centre’s objectives and activities. The talks were centered especially on the areas of cooperation between the academic and cultural institutions of Morocco and IRCICA. Over the past decades, this cooperation has resulted in some landmark scholarly events: a recent example is the International Congress on "The Maghreb and Western Mediterranean during the Ottoman Period" which was organised in Rabat in 2009 jointly by IRCICA and the Royal Institute for the History of Morocco, while an earlier example was the International Seminar on Crafts: Prospects of Development organised jointly by IRCICA and Ribat al-Fath Association, Rabat, in 1991.

It can be recalled that starting from IRCICA’s establishment, Morocco was represented in the Governing Board of IRCICA for four terms, from 1981 to 1998. Furthermore, one of the landmark documents preserved in the archive on the history of IRCICA is the Royal Message which was sent by H.M. King Hassan II, King of Morocco and Chairman of the Seventh Islamic Summit Conference, to the ceremony of the Fifteenth Anniversary of IRCICA held in 1995.

Dr. Eren guided the Minister to the Silahhane and Çit buildings where he gave her information on the library’s activities and collections, the studies and publications concerning the copies and the translations of the Holy Quran, the activities relating to the preservation of the Islamic heritage of Al-Quds, and the many other projects. The Minister expressed her appreciation of the activities.

In the morning of the same day Minister Mrs. Bassima Hakkaoui had addressed the opening ceremony of the the International Symposium on The Family in the Muslim Countries and Communities which was organised by IRCICA jointly with the Turkish Ministry of Family and Social Policies and Sancaktepe (Istanbul) Municipality.