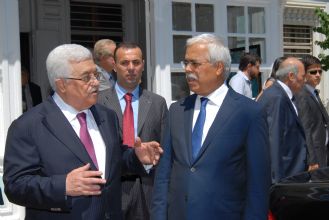 The visit of the Palestinian Head of State Mr. Mahmoud Abbas to IRCICA

The Palestinian Head of State Mr. Mahmoud Abbas officiated the Palestinian Ambassadors’s Conference held on 23 July in Istanbul launching a campaign to bolster international support for the acknowledgment of Palestine’s statehood. The conference was opened by the Prime Minister of Turkey Mr. Recep Tayyip Erdoğan with a comprehensive address.

The same day, Mr. Mahmoud Abbas and the accompanying delegation visited IRCICA. Mr. Abbas was received at the entrance of the Palace by Director General Dr. Halit Eren, and invited to the Directorate General, where he was briefed on the Centre’s activities, in particular, those relating to Al-Quds, including the long-term program of seminars and workshops on the Islamic architecture and monuments of Palestine and resulting reports and the publications of collections of historical photographs. Then, Dr. Eren guided the distinguished guest and his entourage to the library and other departments of IRCICA where he gave information on the results of various activities, among them the editions of the oldest copies of the Quran published by the Centre.

At the end of his visit, Mr. Mahmoud Abbas signed the Visitors’ Book, expressing his appreciation of the activities and their results.