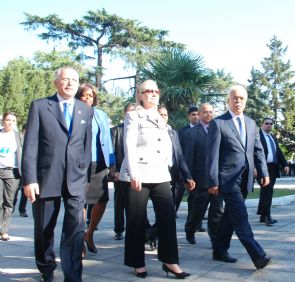 US Secretary of State Hillary Clinton at IRCICA

US Secretary of State Mrs. Hillary Clinton paid a visit to IRCICA on 15 July 2011 before the commencement of the Ministerial Meeting on UN Human Rights Council Resolution 16/18 which the Organization of Islamic Cooperation (OIC) hosted on IRCICA’s premises the same day. Mrs. Hillary Clinton met with the OIC Secretary General Prof. Ekmeleddin Ihsanoğlu and IRCICA Director General Dr. Halit Eren at the Director General’s office. Mrs. Clinton’s first visit to IRCICA was evoked which had taken place on 28 March 1996 in the context of her visits to Turkey and Eastern Europe as the First Lady of the USA. Mrs. Clinton received information from Dr. Eren on the developments achieved in IRCICA’s activities since that time. Dr. Eren presented her with a souvenir photograph album of her first visit and a copy of the album of historical photographs of Al-Quds during the Ottoman period which was published by the Centre.

The Ministerial Meeting on the implementation of UN Human Rights Council Resolution 16/18 on “Combating intolerance, negative stereotyping and stigmatization of, and discrimination, incitement to violence, and violence against persons based on religion or belief” was co-chaired by the OIC Secretary General Prof. Ekmeleddin Ihsanoglu and US Secretary of State Mrs. Hillary Clinton. Foreign Ministers and high-ranking officials of 28 countries from OIC Member States and Western countries including international organizations as well as the EU High Representative for Foreign Affairs Lady Ashton were invited to participate.