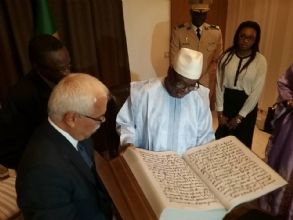 H.E. Ibrahim Aboubacar Keita, President of the Republic of Mali received Dr. Halit Eren, Director General of IRCICA, at the presidential office on 1st September 2016. Dr. Eren was in Bamako during the period of 1st-2 September 2016 for official contacts with the Ministry of Culture of Mali on the subject of cooperation to develop in the fields of studies on Islamic culture and preservation of cultural heritage.

Dr. Halit Eren, Director General of IRCICA, held meetings with H.E. Ms. N’Diaye Ramatoulaye Diallo, Minister of Culture of the Republic of Mali, during the period of 1-3 September 2016. A cooperation agreement was signed as a framework for the activities to be conducted towards promotion of studies on Islamic history and culture and preservation of the cultural heritage of Mali.

IRCICA Director General Dr. Halit Eren, who is on an official visit in Bamako, Mali, visited the Ambassador of Turkey in Mali Mr. Hikmet R. Şekeroğlu at the Embassy of Turkey in Bamako on 1st September 2016.