Home Activities RCICA Director General participated in the annual meeting of the Group of Strategic Vision “Russia–Islamic World” in Grozny, 16-20 May 2017 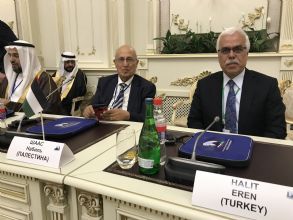 RCICA Director General participated in the annual meeting of the Group of Strategic Vision “Russia–Islamic World” in Grozny, 16-20 May 2017

IRCICA Director General participated in two large-scale conferences that underscore relations between Russia and the Muslim world which were held in the Russian Federation mid-May: the annual meeting of the Group of Strategic Vision “Russia – Islamic World” which was held in Grozny, capital of Chechen Republic on 16-17 May and the 9th International Economic Summit “Russia-Islamic World: Kazan Summit” convened in Kazan, capital of Tatarstan Republic on 18-20 May.

The meeting of the Group of Strategic Vision was placed under the chairmanship of H.E. Rustam Minnikhanov, President of Tatarstan, Russian Federation, and H.E. Ramzan Kadyrov, Head of the Chechen Republic, Russian Federation. The address by the Russian President Vladimir Putin conveying best wishes of success for the conference, was read by the Russian Deputy Foreign Minister and Special Presidential Envoy for Middle East and North Africa, Mr. Mikhail Bogdanov. A message by Russian Foreign Minister Mr. Sergei Lavrov was also read by Mr. Mikhail Bogdanov. The opening address was delivered by Tatarstan President Rustam Minnikhanov, Chairman of the Group of Strategic Vision. The Head of the Chechen Republic Ramzan Kadyrov gave an address. Several working sessions were held. Presentations were made on the cultural heritage and economic potentials of the Chechen Republic. The meeting’s final resolution reaffirmed that the Russia- Islamic World Strategic Vision Group serves as a platform for collaboration by holding a broad range of events with a view to further strengthen relations between Russia and Islamic countries. The participants concurred that Russia and the Islamic countries shall pay special focus to fostering better trade, economic and investment ties that serve as a solid foundation for collaboration at the political and other levels. It was decided among others, to increase technological cooperation and interaction in the fields of culture and youth policy. The problems of extremism and radicalization were also addressed; the final resolution stated that desirable results in combatting radicalism can only come through promoting and expanding mutually beneficial cooperation between countries.

In his address at the Group of Strategic Vision “Russia – Islamic World”, IRCICA Director General Dr. Halit Eren said that Russia and the Islamic world have maintained multiple relations in all fields which produced a shared history and a shared heritage. It is important to promote knowledge and awareness of this heritage for its own sake and also as an example for study, since such exemplary experiences of cultural interactions can help to foster peaceful coexistence of cultures across the globe. Dr. Eren said that the mission of IRCICA is directly related to this objective: as the OIC’s cultural subsidiary center, IRCICA works to promote cultural exchanges and cooperation between its member countries and across the world. He gave an overview of the cultural cooperation established since the 1990s between Russian Federation’s academic and cultural institutions on one hand and IRCICA on the other. Dr. Eren added that Russian Federation’s acquiring the status of Observer with the OIC in 2005 has been seminal in the strengthening of relations in all fields between Russia and the OIC Member States.

After conclusion of the Grozny meeting, the Kazan Summit and sessions of the 9th International Economic Summit “Russia-Islamic World” were held on 18-19 May in Kazan, under the chairmanship of Tatarstan President Minikhanov. The Kazan Summit aims to strengthen trade and economic, scientific-technical, social and cultural ties between Russia and the member countries of the OIC. This year the meeting constituted an international platform for promotion of joint project realization, presentation of banking and investment opportunities. A number of exhibitions by public and private companies were organized.

The Director General of IRCICA Dr. Halit Eren made high-level contacts during the period of the Summit. Tatarstan President H.E. Rostam Minikhanov greeted Dr. Eren meeting him at Kazan Kremlin. On 19 May, Dr. Eren held a working meeting with H.E. Mr. Kamil Ishakov, Advisor to the President of Tatarstan, Russian Federation and former Permanent Representative of Russia with the OIC. The focus was on the planned curricula and library of the Higher Islamic Academy which will be opened for postgraduate studies in the historic Bolgar near Kazan in the coming academic year. The same day, H.E. Mr. Mintimer Shaimiev, former President of Tatarstan, Russian Federation and State Counsellor, met with Dr. Eren at the Kazan Kremlin.