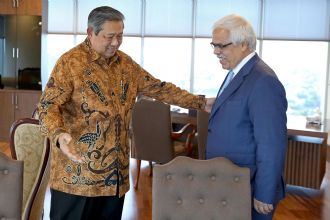 The International Conference on the Question of Jerusalem: “addressing the present and shaping the future of Jerusalem” was organized jointly by the United Nations Committee on the Exercise of the Inalienable Rights of the Palestinian People and the Organisation of Islamic Cooperation from 14-16 December 2015 in Jakarta, Indonesia.

An exhibition titled “Jerusalem: History and Civilization”  was organized on the occasion of the conference jointly by the Embassy of the State of Palestine in Jakarta, IRCICA, and the Ministry of Foreign Affairs of the Republic of Indonesia. Displayed at the National Gallery of Indonesia (affiliated with the Ministry of Education and Culture of Indonesia) from 16-20 December 2015, the exhibition comprised 50 historical photographs selected from IRCICA’s archives. Speakers at the official opening of the exhibition were the Ambassador of the State of Palestine to Jakarta Mr. Fariz N. Mehdawi, the Deputy Governor for Culture and Tourism, Jakarta, Prof. Dr. Sylviana Murni, and IRCICA Director General Dr. Halit Eren. The Ambassadors of OIC Member States in Jakarta were present at the opening.  Present views of Jerusalem, shot by Mr. Süleyman Gündüz (Turkey) were also displayed beside the historical photographs.

During the period of the conference, the Secretary General of the OIC H.E. Mr. Iyad Amin Madani and IRCICA Director General Dr. Halit Eren paid a visit to the Minister of Education and Culture, Republic of Indonesia H.E. Mr. Anies Baswedan. IRCICA’s current and planned future activities in the cultural sphere were acknowledged.